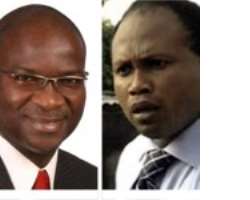 The Nigerian movie industry is indeed a bag of mixed-fortunes. Offshore, it is hailed as the biggest in Africa, second biggest in the world, and a gold mine for foreign exchange. But at home, it is despised by government and plundered by pirates. Distraught movie makers in the midst of the rejection told their own story recently, when they organized the AMP/Eko Film Festival that held at the National Arts Theatre in Iganmu, Lagos. Nollywood actor and producer, Paul Obazele, told M2's Elcee McEdwards and Buki Oyedemi what the festival portends for the movie industry in Nigeria.

entertainmentPaul Obazele is one of the most recognized faces in Nollywood. From a distance he looks cool, you will assume he can't hurt a fly, but when the issue has to do with Nollywood, he lets off like a bazooka. At the moment, the local movie industry is at its lowest ebb. Movie activities have been reduced considerably due to the many problems confronting the industry. And neighbouring Ghana seems to be gearing up to wrestle leadership of the movie business from Nigeria.

Nollywood is rated the second biggest film industry in the world, ahead of Hollywood. Good news this rating is, but many analysts and some practitioners applaud it cautiously, insisting that the rating is in recognition of status quo ante, not status quo. Despite all the shortcomings of the Nollywood, its impact in the economy cannot be denied even by it harshest critics. “Outside the federal government, we are the second largest employers of labour. We produce a minimum of thirty films a month. The least film engages one hundred and twenty people. The least paid gets seven thousand naira,” Obazele said brimming with passion. An impressive statistics by all assessments; but it doesn't seem the people in government know this, and if they do, it seems they don't care.

Now, one might say that every stakeholder in the movie industry is involved in the campaign to figure out a way forward for the industry and celebrate their contributions in the absence of government support. Last week, movie producers were in festive mood as they set out several days to celebrate the history of the Nollywood and the contributions of the producers to the success story. “We are creating a situation where the average Nigerian feels wanted, seen and heard,” Obazele says.

The Association of Movie Producers (AMP)/ Eko International Film Festival, done with support from Lagos State Government, is an initiative like any international film festival. It featured seminars, visits to the motherless babies' homes and a brainstorming session with Governor Babatunde Fashola on how to harness the tourism potentials of Lagos. According to Obazele, the festival, a prototype of major international film festivals, is designed to create a more positive perception of Nigeria. “It will be shocking that up till five years ago, Europeans still believe that we sleep on trees and the black man does not have a home. But when they watch our movies, their perceptions change. They are not interested in the story, they are interested in the picture and from the picture they are dazed and they begin to listen to the kind of stories you are telling,” Obazele points out.

But what story does Nollywood tell of Nigeria? That has been the major grouse of most critics who complain that the industry emphasizes more on the negatives, and the practice they claim undermines the country's image across the boarders. At a recent function in Lagos, Minister for Information and Culture, Dora Akunyili brought up the issue when he lambasted the film makers for portraying the country in bad light.

Her stance is that Nigerian movies are giving the country a bad image by emphasizing much of 419, voodoo, prostitution and other vices. “We want extra commitment from Nollywood to stop projecting Nigeria negatively,” she says. Obazele in agreeing with her insists that for that to happen, government has to pay more than lip services to the industry by injecting funds into it. “Every nation from America, UK, Germany and France provide film funds for movie makers. James Bond is a British government film. Are you talking about the Pentagon, CIA, or the Marines? That is what film can do for you. If they give me a film fund, I will carry out their propaganda for them. I will clear out the acts there. I should tell them how beautiful our soldiers are. I will tell the world that once upon a time the Nigerian police won three different medals at three different times in peace keeping missions as a credit to the nation.

“We can tell the world how we brought peace to Sierra Leone, how we reinstated Ahmed Tijan Khabar (former Sierra Leonean President) and how we brought peace to Liberia. We can tell stories about Dogonyaro - a gallant Nigerian soldier who fought, took the land and handed it back to a democratically elected President. Do we have the guts to tell the world how good the Nigerian soldier is? Do we have the guts to tell them about 'operation day break,' which Tunde Idiagbon (former Nigeria Chief of Army Staff) led to take back the Bakassi peninsula? We can tell them what Okey Bili can do. We have the details, but government is refusing to give support. Let us show the world how great we are,” he says.

Indeed, the lack of film funds has hardly been the greatest challenge confronting the industry. Without any support from government the industry has independently funded it activities, paid actors, supported the printing industry, generated foreign exchange for Nigeria and created huge employment.

Another of the industry's great challenges is lack of enabling environment and government's lack of commitment in the anti-piracy battle. “We are faced with piracy everyday. Today, we have what we call the 20 in one DVD and that is absurd, crazy and criminal. The same 20 in one DVD is sold at N120, whereas our own one film is sold for N180 and at that we just make barely N20. Putting 20 films in one DVD means one movie is sold for N10 and this is not with the consent of the owners of the film. Yet all those who are supposed to be policing this thing for us, namely the Nigeria Copyright Commission and others are not doing anything for us,” Obazele notes with concern. He would that government demonstrate more seriousness on the anti-piracy battle including shutting down the Alaba market, reputed to be the headquarters of pirates' activities in Nigeria.

With government showing no signs of offering any help, Nollywood operators are looking up to corporate bodies and other stakeholders for partnership. The Silverbird group, one of the biggest entertainment companies in Nigeria, recently agreed to partner with practitioners by supporting them with funds and equipment so they can shoot high quality films. Obazele discloses that other stakeholders and allied groups have been engaged to support the industry. Obazele lauds the Lagos State Government for its unprecedented support for the movie industry. “We've gone to different states to work and the only state that has been able to tolerate us and make us understand that they are part of us and we are part of them is Lagos. In other states, we are harassed. But we ask ourselves: what has given this country glamour? And the answer is Lagos State. It's the centre of excellence and the most tolerant state. We started here and we have been here. 90 percent of practitioners are not from Lagos, but they are comfortable in Lagos. Why? It's because of the enabling environment. In other states, if the police are not harassing you, one government officer or the other will,” he concludes.