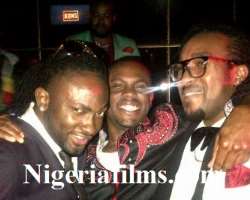 In an amazing final eviction, Namibia's Dillish emerged as the winner of this year's season eight of the Big Brother Africa (BBA) game show tagged The Chase, sending the likes of Melvin, Beverly and few others packing.

Following the pronouncement of Dillish's emergence as the winner, the social media went viral with anti-Melvin posts and messages describing the young model as a loser and failure. To counter such attack on him, BBA's Uti Nwachukwu took to his handle by faulting the raging critics against Melvin.

I will still CELEBRATE MELVIN ODUAH! As I said before..his story is so inspirational! 'NEVER GIVE UP' is what I've learned from him! A man is as Worthless as dry bones the minute He stops TRYING! In the Words of Aaliyah : " if at first you don't succeed, Dust yourself off and TRY AGAIN, you can dust it off and TRY AGAIN TRY AGAIN*music* So let no one be Discouraged.. God has a way of FINALLY compensating his children in ways Far more worth than what we humans are capable of..and HE ALONE shall Take ALL THE GLORY.

He has gone down in History as the BEST BEHAVED BBA HOUSEMATE of ALL TIME. Mark my words:- sit back and watch the amazing OfFERS roll in for him! To all who poured in their time and energy to vote! I say a Big thank You! May your helpers locate you amen. You have shown people everywhere that when we make up our minds,Nothing can stop us! He got the Nigerian vote and that has to mean something! Thank YOU!

What I find disappointing tho is those of you who changed tones immediately.Creating insulting Dp's and nasty BC's in an attempt to mock the young man for his efforts. Even some senior colleagues whom I respected so much until now(Not surprised tho.They are part of reason for the disturbing state of this country) Joined in! Know this: God can Never start what He does not Finish and will Never bring shame to the Humble,Kind Peacemakers!(Hope u remember their blessings???) Its amazing how people come out in numbers to insult on social media and blogs, but not even a quarter of these come out to show Love and support. Very disturbing. We need to change o!

Ever wonder why you remain poor&stagnant? Its cos of this attitude. Learn to Celebrate and Encourage others regardless of their situations. Congrats to DELISH!, you earned it and Africa rewarded you. We are proud of you as you also conducted yourself with Dignity and Self respect. My Name is UTI NWACHUKWU winner BBA allstars and I am proud to be a SUPPORTER OF MELVIN!

“I Had Always Wanted to Propose to Lola”- Peter Okoye