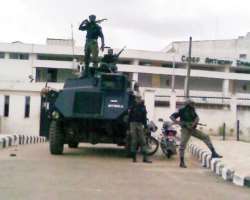 Bomb scare at Edo House of Assembly
By Jethro Ibileke
March 2, 2010 12:47PM
http://www.nigerianbestforum.com/blog/wp-content/uploads/2010/03/dt.common.streams.StreamServer10.jpeg Fear and confusion gripped the Edo State House of Assembly complex, Monday, following the discovery of a material believed to be a bomb by the side of the complex, opposite the General Hospital mortuary.

The discovery of the substance, shortly after the day's sitting at about 12pm, by one of the policemen guarding the complex since last Monday's fracas, sent staff of the Assembly scampering to vacate their offices. Police from the anti-bomb squad were also called in to cordon off the entire area while awaiting sand bags which they said would be used to detonate the bomb.

The police team that came to the complex was led by Assistant Commissioner of Police in charge of operations, Clem Adoda, while Taiwo Akingbehin led a team from the anti-bomb squad. None of the officers spoke to journalists, as Mr. Adoda referred them to either the state Commissioner of Police, Kachi Udeoji, or the police spokesman, Peter Ogboi.

But the hand written report submitted to Mr. Adoda by Mr. Akingbehin indicated that the substance was an Improvised Explosive Device that was stuffed into a Ragolis water can. The report said the object was made up of explosives and other accessories capable of sending shocking waves across a 500 metres radius, which fragmentation the report also said could 'cause injuries to or death to many.'

By implication, if the bomb had detonated, the impact could have affected part of the National Museum which is less than 500 metres from the Assembly gate complex.

The bomb scare was not discovered until few minutes after the House resumed sitting, with the new Speaker, Bright Omokhodion, presiding. None of the Peoples Democratic Party (PDP) members attended the meeting, but aides to some of them were seen in the Assembly complex and they refused to talk about the whereabouts of their bosses.

During the sitting, the House passed a resolution directing the state governor to set up an enquiry into the circumstances that led to a fire incident at the council secretariat of Etsako West local government council.

'The security apparatus and agencies should be on a double alert to check the tendencies of arsonists. They should strengthen their vigilance over public properties, especially government properties like the state House of Assembly where some people are inclined towards wanton destruction. We will be able to in due course strengthen our security here and ensure that miscreants and never-do-wells don't have their way,' the House said.

Threatened seat
Speaking to journalists in his office, shortly after the day's sitting was adjourned, Mr. Omokhodion threatened that the seat of the PDP members may be declared vacant if they continue to sit out of the Assembly.

He said: 'You need eight to form a quorum and that you have thirteen is that you have over-formed a quorum and when you are on the floor of Parliament, you try to pocket the toga of partisanship. You are a honourable member and so we expect you to do those duties which you are elected to the people of Edo State. So, those who are not coming are mindful of the fact that they have a constitutional duty to play in the House of Assembly and in the lives of the people of the state and they must have a minimum attendance record for them to justify the seat they occupy. So, if continuous absence from sitting becomes habitual on their part, they will be diminishing their attendance records and the sanction for that is very clear in the constitution – the seats will be constitutionally declared vacant.'

However, the interim injunction which restrained the former Speaker, Zakawanu Garuba and his deputy, Levis Aigbogun, from parading themselves as Speaker and deputy speaker pending the determination of the suit brought before it by the House, would expire on Friday and both political parties are expected to continue their legal tussle over the legality or otherwise of the removal of Messrs Garuba and Aigbogun. The two men, both members of the PDP were removed from office in controversial circumstances last week in a putsch led by the Action Congress members.