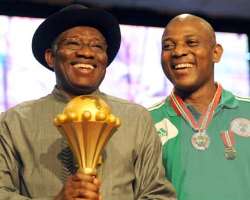 
Members of the 1983 Flying Eagles team have begged the Federal Government through the Sports Minister, Bolaji Abdullahi to redeem the scholarship pledge made by former President, Shehu Shagari for their qualification for the FIFA U-20 World Cup in Mexico.

The team were the first Nigerian side to qualify for any FIFA organised tournament and for achieving that landmark feat, the government of the day then, offered all the players, who were mostly students, scholarship to study at any tertiary institution of their choice.

And writing on behalf of the team, Paul Okoku, who commended the Sports Minister for his role in revamping Nigerian sports, said it was important for government to make good his pledge by redeeming what it pledged to the 1983 F;ying Eaglets set to Mexico.


Paul Okoku
'The Sports Minister, Bolaji Abdullahi should also be applauded for ensuring that the President Jonathan aligns the federal government's pledge with action irrespective of whom and when it was made. A promise by any government, whether past or present, is binding on the country.

'Our appeal is for President Jonathan to honor the scholarships pledged to us in 1983.. The scholarship was a promise to us for being the first team ever, in the history of Nigeria , as far as we can recall, to put Nigeria on the world map (first to qualify Nigeria for any FIFA tournament.

'The pronouncement was subsequent to qualifying to represent Nigeria , in part, and Africa, largely, in the 1983 edition of the U-20 World Cup in Mexico . The then minister of sports, Alhaji Buba Ahmed, met with us soon after defeating Guinea in Nigeria to secure the ticket to the tournament, and asked us what we wanted for bringing honor to Nigeria .

'We were proportionately divided as we discussed it intensely. Some wanted houses while others wanted scholarships since most us were students at the time. Immediately, and without hesitation, the then sports minister, Alhaji Buba Ahmed said'I will ask the president to award you all scholarships since the majority of you are students'.

'And within a few days, the president of Nigeria then, Alhaji Shehu Shagari, through the sports minister, Buba Ahmed, announced on the pages of Nigerian newspapers that the president has awarded us scholarships to further our education, any where in the world'.

Both men are still alive as witnesses to their pledge.

'To this end, we beg the Sports Minister, Hon. Bolaji Abdullahi and the DG, Hon. Gbenga Elegbeleye  to associate sympathy with our plea. At this moment, as we consider what we should ask for, it was unanimously suggested that houses will suffice because most of us have since graduated from higher institutions,' added Okoku.