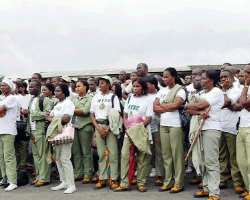 
Members of the National Youth Service Corps (NYSC) undertaking their primary assignment in Otuoke, Ogbia Local Government Area of Bayelsa State, now have a modern living quarters built for them by the Niger Delta Development Commission (NDDC). The 44-chalet complex, which would house at least 88 corps members, has been completed and was fully fitted with air-conditioners, water heaters and other conveniences.

Taking the NDDC Acting Managing Director, Dr. Christy Atako, round the new corps members lodge, the Director Bayelsa State office of the commission, Dr. Princewill Ekanem said that the facility was customized to meet the needs of young men and women serving their country for one year. He said that the complex, in addition to the chalets, has one large conference room and an Information Communication Center (ICT).

Dr. Atako expressed satisfaction with the quality of work done in the building and gave kudos to the contractor for working within the scheduled time for the completion of the project. She said that the NDDC was in the process of identifying completed projects that would be commissioned in the coming weeks to erase the wrong impression that it was not doing enough to develop the Niger Delta.

A representative of the NYSC members, who would be the direct beneficiaries of the first class accommodation, Mr. Michael Abisha, commended the NDDC for the project, which he said would go a long way in helping them to serve to the best of their ability. He, however, appealed to the NDDC to add sports facilities to the complex to further enhance its value.

The NDDC boss also inspected the 16-kilometer internal roads network being constructed by the commission at the Federal University, Ouoke. According to  Engr. Onduku Abraham of the NDDC Project Monitoring Service, the roads traverse the new layout of the campus and would provide access for students and staff of the new Federal University. He noted that the roads were being built on swampy terrain and were expected to be completed in 72 weeks.

The project engineer, Boma Israel Amakuru assured the Ag. Managing Director that the internal roads  would be completed on schedule and according to specifications. 'We don't have any problems with the surrounding communities and the NDDC has so far funded us adequately,' he said.

The NDDC Chief Executive Officer, had earlier addressed staff of the Bayelsa State office at their temporary accommodation in Yenagoa. She charged them to see themselves as agents of change in the Niger Delta.
'Together, we are going to work towards creating a new and improved image for the NDDC,' she said.