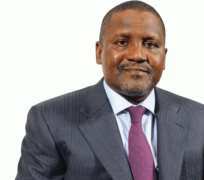 
The government of Federal Democratic Republic of Ethiopia has lauded President/Chief Executive of Dangote Group, Aliko Dangote for siting a cement plant in that country, promising to provide an enabling atmosphere for the Group and other investors.

The commendation, conveyed through a letter from the government of Ethiopia to the President/Chief Executive, came on the heels of a similar appreciation by the government of Tanzania over the recent groundbreaking ceremony of a 3.0mmtpa cement factory at Mtwara, Tanzania by the leading cement manufacturer.

Dangote Cement had launched a 2.5mmtpa plant in Mugher, Adaberga District in Ethiopia, with a pledge by the company to ensure that it is completed on schedule. The Ethiopian government in a letter signed by the State Minister of Industry, Tadesse Haile, said it was happy with the steady progress being recorded at the plant construction site and stressed the determination of the government to do all possible to ensure the construction continues unhindered.

'We received the project progress report from your office and it was a pleasure for us to see the remarkable progress being made by your esteemed organization in the setting up of this prestigious project,' the letter read in part.

According to the letter, the plant has become a successful reference point in the government's task of attracting foreign investors to do business in the country, saying the success of Dangote Cement will boost the country's search for more investors. The letter added: 'The Ministry of Industry is proud to showcase the project to prospective investors as a show case of successful foreign investment in Nigeria. It is commendable that the project is transforming the region and has generated employment opportunities to a large section of the local population.'

Appreciating the Group's investment, it called on Dangote to explore other investment opportunities in the country, adding that the Ministry will ensure the realization of the projects.

Dangote Cement is Nigeria’s leading cement producer with three plants in Nigeria and plans to expand in 13 other African countries. The Group is a fully integrated quarry-to-customer producer with production capacity of 19.25mmtpa in Nigeria, with plans to increase to at least 29mmtpa in 2015. The Group plans to build more integrated, grinding and import facilities across Africa, bringing its total capacity to 55mta by the end of 2016.