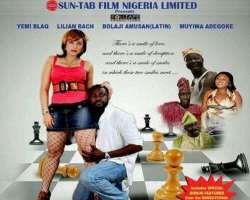 After hitting the cinemas in 2011 for her first self produced Yoruba movie, sultry actress, Lilian Bach will finally release the film on DVD on August 26, 2013. The light-skinned screen diva has yielded to the calls of her fans to make the blockbusting flick available for them to watch in the comfort of their homes.

Information reliably gathered by Nollywoodgists.com shows that the movie will be marketed and distributed by Sun-Tab Film.