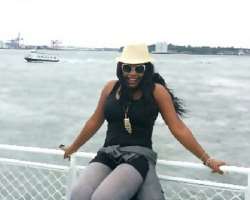 Information reaching us from some tale-bearers in the industry confirms that Nollywood actress, Nuella Njubigbo has jetted out to the United States of America (USA) on vacation.

We were told that the actress recently left the shores of the country to relax in Uncle Sam's land after having hectic schedules in Nigeria on some movie locations.

Recall that Nuella was alleged to have cornered a businessman who took her to a state governor as a bait to get the governor's approval for a proposal. It was then further alleged that the expensive car Nuella claimed to have bought was actually courtesy of the said state governor.

Nuella was also accused to have wrecked Tchidi Chikere's marriage, all allegations she has vehemently denied.