Faith as a Universal Component of Homo sapiens 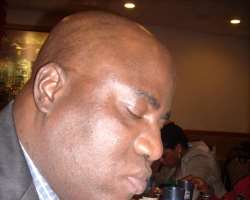 WHAT OF THE FAITH IN HEBREWS? The writer of Hebrews, who was possibly Apostle Paul said in a popular verse in Hebrews 11:1 “Now faith is being sure of what we hope for and certain of what we do not see,” and went further to say that without it, no one could please God. Then he gave a list of Hall of Fame in Faith Land. But this faith, although in the New Testament, was referring to the Old Testament saints, who looked expectantly to the coming of our Lord Jesus Christ for God's Salvation. Even though Christ did not come during their time, they believed and fully trusted in the Lord that, even in death, they would be taken to heaven. They knew God Almighty could not lie (Numbers 23: 19: “God is not a man, that he should lie, nor a son of man, that he should change his mind. Does he speak and then not act? Does he promise and not fulfill?”). These forerunners of general faith were right and their faith was not misplaced. Right inside Sheol where they were waiting for God's fulfillment of His promises, our Lord Jesus Christ eventually went there and brought them out thus fulfilling the longings of David, one of the Patriarchs who predicted that the Lord would not leave let him see corruption or abandon him in the abode of the dead. That was why Jesus Christ said He was the Resurrection at the tomb of Lazarus. Salvation is not a “thing” it is a person. The Signifier is also the signification. Heaven is not a place but the Presence of God Almighty just as we cannot talk of America devoid of us the human beings that domicile in the geographical space known and called the United States of America. This play on words should be decoded over and over again as we read the Bible especially the Synoptic Gospels. When Jesus Christ said He is the Way, the Truth and the Life, no one goes to heaven but by Him, He was saying that any other way leads to the Nether gloom, any other truth is a lie and any other life is hell. In the Journey of Life, there is no mathematical simultaneous equation. There are only two broad highways like two parallel lines that cannot meet and there is no in-between. The very nature of human existence confirms these two binaries: Light versus Darkness, Good versus Bad, and Heaven versus Hell etc. But unfortunately, none of these Great Giants of Faith listed in Hebrews 11 witnessed the physical coming of God's Salvation in our Lord Jesus Christ and hence the Gift of Faith of the Holy Spirit; nevertheless, they saw the spiritual fulfillment of their faith. In other words, their trust and faith in God Almighty were not misplaced.

From My Mail Bag This Week:
Sir,
I read your column on Nigeria world and I really learn a lot. I would appreciate sir if you could be sending me more Christian articles and revelations direct to my inbox.

Thank you very much for your interest in the weekly column. Yes, I can arrange to have these weekly articles delivered directly to your email box. Other readers too have inquired about the same thing and because of my other commitments; I may not be able to do this weekly. However, there is good news; a man of God in California has volunteered to take charge of this service and this wonderful child of the Living God, a loving brother in Christ, has been good at it since he voluntarily accepted to do this. I will send your email to him so he can add you to his database. As soon as the weekly article is available, you will read it directly in your mail box. We thank God for your life and we are praying for you guys in Russia. All the best and keep the torch alive until the coming of our Lord and Savior Jesus Christ.

====================.
BOOK SIGNINGS IN WASHINGTON, DC. USA.
Thank God for modern technology. I am writing this on my way to Washington DC to make appearance with my co-author, Dr. Margie Marie Neal on several book signings we have scheduled for the next one week. As I disclosed last week, we will be on the road in the next couple of weeks to promote our latest book; “Aliko Mohammad Dangote; the Biography of the Richest Black Person in the World,” across the United States. We unveiled the book officially penultimate week at our home town of Chicago and it was a successful outing. Kudos to Ms. Antoinette Wright of Jabez Cultural Management and Publicity Company, who has been behind our publicity and marketing campaign; we can't ask for any professional better and well-equipped to handle the book. I will report back to you guys how the book signing events went here next week.

WORLD PROPHECY: This is huge! Something of global importance, an earth-shattering event and a cosmic occurrence is in the offing in the world. I don't know what it is but the Holy Bible has predicted it and we shall all see it with our very eyes soon. This event is part of end-time prophecy and it's about to take place very, very soon in the next 12 to 24 months. I don't know what it is; I repeat again, I wasn't shown what it is but again, it's HUGE. The whole world will be shocked; from the rising of the sun to the setting of the sun; from the East to the West; from the South to the North, the planet earth is about to witness a catastrophic event. The Divine Hand of God Almighty, the Creator of the heavens and the universe, Our Lord and Savior Jesus Christ is about to intervene in the affairs of humanity. The world media, the commentariat, the scientists, the astrologers, the men and women of earthly wisdom and their ilk will be talking their heads out but will not be able to explain but those who know the True God will be unshaken and unperturbed. What is it? I wasn't shown but was only told (Luke 21:11 & 25).

(This prophetic spiritual caveat emptor will be a weekly feature until its fulfillment before our very eyes on earth).

NEXT WEEK: We shall examine the Holy Spirit Gift of Healing next week. What is disease? What is the causality between sins and bodily impairment and malfunction known as diseases of the body? What are the differences between disease of the body, soul and spirit? What are the causes of soulical and spiritual diseases and how can they healed by born-again Christians?

Disclaimer: "The views/contents expressed in this article are the sole responsibility of the author(s) and do not necessarily reflect those of The Nigerian Voice. The Nigerian Voice will not be responsible or liable for any inaccurate or incorrect statements contained in this article."
Articles by The Christian Walk
14-10-2015  Request For A Ministerial Slot-the Federal Ministry Of Agriculture And Rural Development-for A Diasp2-10-2015  Without The Holy Spirit, You Are Not Saved And Not A Christian26-9-2015  The Jesus Christ Solution Center, Texas And The Glory Of The Lord God Almighty21-7-2015  Memo As President Muhammadu Buhari Comes To Washington13-7-2015  What Does The Lord God Almighty Want Me To Do?More...