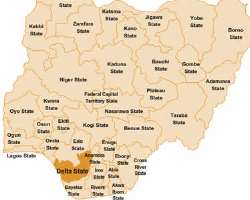 
Delta State government has once again re-affirmed its pledge to support the economically poor and underprivileged families in the state and enhance its poverty alleviation programme by setting up a special scheme which will avail such families of monthly financial assistance and an annual exit payment, through the Conditional Cash Transfer (CCT) scheme.

This disclosure was made by the Delta State Commissioner, Special Duties, Directorate of Millennium Development Goals, Queen Mother Victoria Ikenchuku, while presenting the mid-term report of her Directorate to journalists in Government House, Asaba, on Tuesday, August 13, 2013.

The Commissioner revealed that the Conditional Grant Scheme (CGS) which was introduced in 2007 is funded from the savings of Debt Relief Gains of $1 billion of which the Federal Government's share is  $750 million, while the State share is $250million, adding that the scheme seeks to engage and support States and Local Governments in achieving the MDGs by the target date of 2015.

Addressing the need to eradicate extreme poverty and hunger, which is Goal 1 of the MDG Goals, Queen Victoria noted that the Delta State government had already keyed into the Federal Government designed Conditional Grants Scheme (CGS) since 2008 and identified Five (5) Local Government Areas, as part of the selection mechanism for an objective implementation of the Conditional Cash Transfer scheme in the State, with the weakest MDG indicators and Five (5) wards and communities from the poverty mapping data already collected and collated by OSSAP-MDGs, using the Baseline Facility Inventory and Needs Assessment.

Speaking further, the Queen Mother said that, 'the Conditional Cash Transfer (CCT) is a social safety net intervention whereby grants are provided to targeted extremely poor households on the condition that their children of basic school age attend school and participate in the free health care programme for children and pregnant women and to this end, a total of 2,250 extremely poor households in five poorest Local Government Areas of Delta State have been targeted as beneficiaries of the Scheme'.

The selected beneficiaries LGA's are Ukwuani, Oshimili South, Warri South West, Okpe, and Udu  and the selection survey of households is already on-going in the five identified communities in five LGA's.

She further added that, 'The life span of the scheme is one year and the Conditional Cash Transfer, CCT, is intended to increase access to education, basic health care and ability to engage in income generating activities by the poor households, while beneficiaries are also assisted in saving towards income that would be invested in petty trading that would provide some steady income for the household'.

She noted that the Directorate would collaborate with the Agricultural Development Programme (ADP), to impact Agricultural Skills on would-be beneficiaries in the selected rural wards/communities, even as she anticipated that this would ensure that the households become self-reliant at the end of the one year scheme.

The challenges, according to her, include community acceptance and buy-in into the projects that are meant to improve their lives, dealing with resistance and apathy in certain communities, intensive capital funding brought about by running costs, commitment by the beneficiaries to acquiring skills and sustainability of the trade engaged in and harassment by community youths over financial gratifications before projects can be sited in the communities as well as the peculiarities and challenges of the terrain in the State.

Listing the achievements of the Directorate, the Commissioner said that from 2008 to date, the Directorate has strengthened existing primary health care facilities in the Twenty Five LGAs in the state through provision of Maternity Wards, Medical Staff Quarters, Units of Delivery Packs, Units of Long Lasting Insecticide Nets, Doses of Anti- Malaria Drugs as well as teaching aids to the schools of midwifery in Asaba and Sapele amongst others.

With specific reference to local governments, the Directorate has so far funded the construction, renovation and provision of Classrooms/administration Blocks, gender friendly toilets, in primary schools, motorized, solar powered or ring wells water schemes, which could be motorized, solar powered or ring wells, provision of teachers' and pupils' desks, chairs and tables, construction and furnishing of primary health care centres staff quarters as well as payment of stipends to Village Health Workers for rendering primary health care services employed by the National Primary Health Care in implementation of the SURE P.

The Commissioner affirmed that the Delta State Directorate of MDGs is an interventionist Directorate, which utilizes the Conditional Grant Scheme Fund to complement the State investments in projects and facilities to enhance the living conditions of all Deltans and ensure the ultimate objective of achieving the Millennium Development Goals by target year of 2015 and beyond.