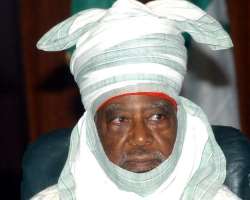 
The Emir of Kano, Alhaji Ado Bayero, has commended  the federal and Kano State governments for their effort to provide adequate security of lives and properties of the citizenry.

Bayero, while stressing  the importance of peace and stability to the development of any society, called on  residents of the state to continue to support and cooperate with security agencies in the task ahead.

The traditional ruler spoke on Saturday through his senior counsellor, Alhaji Abbas Sanusi, Wamban Kano, who led other council members and district heads to pay a Sallah homage to the state acting Governor, Dr. Abdullahi Umar Ganduje, at the Government House Kano.

The Emir also appealed to the people of the state to continue to support and cooperate with their elected representatives at the state and federal levels for the provision of more democracy dividends.

Earlier in his remarks, Governor Rabiu Musa Kwankwaso of Kano State, represented by his deputy, Alhaji Abdullahi Umar Ganduje,  had commended the role being played by the traditional rulers in the maintenance of law and order and pledged to continue to partner with them for the development of the state.

He used the occasion to recall the numerous achievements recorded by the state government since its inception in the areas of health, education, empowerment of youths and women and other development projects being executed to better the lives of the people of the state.

Kwankwaso also used the opportunity to call on the residents of the state not to relent in doing everything possible to clear their drainage to avoid flood that will lead to possible  loss of lives and properties.

According to him, this is necessary as government will not be able to reach the nooks and crannies of the state without the helping hand of the residents by engaging in proper refuse disposal , saying government will ensure early evacuation of the refuse.
While commending the people of the state for their support and cooperation to the present government in the state, the acting governor also prayed for quick recovery of the Emir who was outside the country for medical treatment.