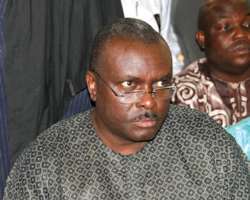 SAN FRANCISCO, August 05, (THEWILL) – Even in former Governor James Onanefe Ibori’s absence, his hometown, Oghara, Delta state, was agog all through Sunday as his admirers, political followers and associates gathered to mark his 55th birthday in grand style.

The celebration began with a Thanksgiving Church service at the Baptist Church, Oghara, where the Pastor, Rev Iweh Godspower, challenged the congregation, to emulate Ibori, who though was not in the church, had attracted the large crowd to both the church and the Oghara town to celebrate his birthday in his absence because of the sheer force of his personality.

What is that aspect of Ibori’s personality that could attract such a mammoth crowed which filled the church and overflowed outside, he asked. He answered his own question: “It is a given that Ibori is a huge success, but that is not why all of you left your homes and different towns to be in Oghara today – even though the man you have come to celebrate may never know the individuals that have come to do him honour. You have come to Oghara today because Ibori is a man who after climbing high in the social, political and economic ladders of Nigeria, did not seize and throw away the ladders in the way most Nigerian big men usually do; he made the ladders available for others to climb up too. And even when some people are too weak to make good use of the ladders, he helped pull them up. That is why you are here today – never forget that and you go and do likewise, help others to climb up the ladders of life and love”. And the crowd applauded, while some others bellowed Ibori’s sobriquet: “Odidigboigbo of Africa.”

Immediately after the Thanksgiving church service, the crowd which included seven first class traditional rulers, Independent Oil Marketers, key professionals, and top politicians from all the six geo-political zones, were joined by a bigger crowd in Ibori’s sprawling Oghara home, built before he became Governor, to begin the social celebrations. Several musicians, comedians, various women groups struggled for chance on the two podiums available to entertain the audience while politicians outdid each other in extolling Ibori.

The Oghara town wore a festive look as it was specially decorated for the event; while bill boards graced strategic positions of Asaba, Agbor, Oghara and other towns of Delta state – celebrating their former Governor whom they have not physically seen for several years now.

The three day celebration ends on Tuesday with a topflight novelty football match at the Oghara Township Stadium.