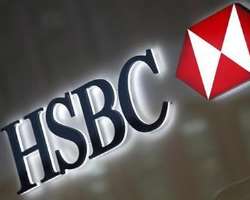 Profit rose 10 percent in the first half of the year as HSBC's three-year cost-cutting plan started to pay off, but this fell short of forecasts after a steeper than expected drop in revenue.

"For all the worthy progress in terms of strategic repositioning ... weak revenues driven by anemic loan growth and a declining margin constrain financial progress and returns," said Ian Gordon, analyst at Investec.

Shares in the bank, Europe's biggest by stock market value, were down 3.9 percent at 725 pence by 0610 ET on Monday, making it the weakest stock in the European banking index .SX7P, having spiked to a more than two-month high on Friday.

Pretax profit in the six months through June reached $14.1 billion, up from $12.7 billion a year ago and boosted by a sharp fall in losses from bad debts. But the outcome fell short of the average $14.6 billion expected by analysts polled by the company.

Revenue fell 12 percent to $34.4 billion, stripping out an accounting gain made on the value of its own debt.

"There has been a slowdown in faster-growing markets in recent quarters, even emerging markets go through business cycles," said Chief Executive Stuart Gulliver.

"But the reality is those markets continue to grow relatively quickly and HSBC remains well positioned across the faster-growing economies."

SUSTAINABLE GROWTH
Gulliver said he expected China's GDP growth to slow to 7.4 percent this year and next as the country shifts away from economic stimulus toward reform measures, but said that slower expansion should provide the basis for more sustainable long-term growth.

Profits in Brazil and Mexico fell sharply as the bank significantly increased its provisions for bad loans there.

HSBC also set aside another $367 million to compensate customers in Britain who were mis-sold payment protection insurance against loan defaults, taking its provision for that issue - which has affected British banks across the board - to $2.8 billion.

Gulliver is two and a half years into his restructuring plan and has cut more than 46,000 jobs as well as selling or closing 52 businesses. He said most of the big changes have occurred and the pace of deals is likely to slow.

The bank said it expects to sell more portfolios of U.S. loans to accelerate the run-off of its consumer loan book there, after selling two portfolios of loans for $3.2 billion in March.

"We'll do more disposals of real estate loans in the second half of this year, there are a couple of transactions we're working on," Gulliver told reporters on a conference call.

HSBC, which said it would pay a second interim dividend of $0.10 per share, taking the total for the first half to $0.20, up 11 percent on a year ago, said it was sticking to its plan to pay out between 40 and 60 percent of its profits in dividends.