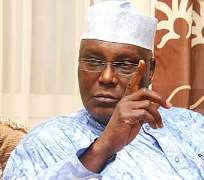 Former Vice President Atiku Abubakar has asked the national chairman of the Peoples Democratic Party (PDP), Alhaji Bamanga Tukur, to accord him his full rights as a frontline member of the party.

This was contained in a letter dated July 11, 2013, addressed to the national chairman of PDP and entitled “Omission of my name from Adamawa PDP State delegation list”.

The letter queried why Atiku is not being called to attend the party’s National Executive Committee (NEC) and Board of Trustees (BoT) meetings, despite his eligibility by the party’s constitution to be a member of both of the party’s highest decision-making bodies.

The letter also pointed out that the name of the former vice president was missing from the list of statutory delegates to attend the national convention later this month.

A close source of the PDP presidential aspirant in 2011 expressed concern that a letter written over three weeks ago to Tukur over such moves has remained unanswered.

The source told LEADERSHIP that recent actions by the party suggests that there is a calculated attempt to ultimately push Atiku out of the party.

A part of the letter reads: “After waiting for a public statement from the party confirming or refuting the abnormality in vain, I decided to draw your attention to this mistake.

“You may recall, Mr chairman, that section 8 sub section 8 (b) of the constitution of the Peoples Democratic Party (PDP) 2012, as amended, states that a person who desires to rejoin the party after leaving it, unless given a waiver by National Executive Committee (NEC) of our party, be placed on probation for a period not less than 1 year. May I remind Mr Chairman, that the 53rd meeting of the NEC of our party which held on Wednesday, 15 September 2010 at PDP national secretariat approved the application of the Adamawa State executive committee for waiver alongside similar applications from Imo, Abia, Edo, Anambra and Kogi states.

“As a bona-fide member of our party, I look forward to the respect and privileges conferred on the office of the vice president and founding fathers of the party by our party constitution. I therefore request for a correction and restitution of my right to attend the forthcoming special national convention of our great party and also membership of the Board of Trustees.”

Citing a plot to edge out Atiku from the party, the source said: “His feeling is that he is being tactfully de-registered yet again so that he does not realize his full rights as a member the party”.

“You recall that he got a waiver in 2010 following a request tabled by the Adamawa State branch of the party and this was unanimously approved by the NEC at its meeting of 15th September, 2010. Atiku went on to contest for the PDP ticket alongside President Jonathan in 2011. Even in the letter to the party chairman, it was stated that the amendment to the party’s constitution in 2012 requiring returning members to observe a period of probation (unless in situations of waiver, which Atiku already had) came well after Atiku had returned.

“His suspicion is that attempts are being made to capture him retroactively so as to deny him his full rights or even push him out of the party as happened before.”

The source further said the attempt to deprive Atiku of his rights in the party is an attempt to replay history: “Recall that prior to the 2007 general elections, the PDP, which he and like minds formed in order to push the military out and provide a formidable platform for a viable democracy was hijacked and, in place of its elected leaders, a set of spineless and zombie-like leadership was imposed on the party.

“Following this, a dubious process of re-registration was invented, through which many bona-fide members including the former vice president were de-registered. Atiku was denied re-registration when he presented himself at his ward in Adamawa State.”