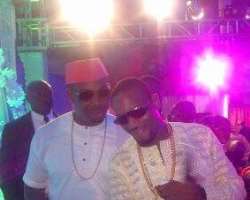 The former Mo'Hit Record bosses performed three of their hit songs at Dbanj's sister's wedding today. They performed Fall in Love, Endowed and my favorite, Suddenly. D'banj called Don Jazzy to join him on stage and he obliged. Heard they gave a good performance.

The veteran producer at Mavin Records and super star D'banj who parted ways since last year, stunned the guests when they got on stage and performed some of their hit duets including 'Mr Endowed', 'Fall in love' and 'Suddenly' for the new couple.

Wow! Is good to see these two together! Nice one guys!!!