Presidency Vs IOCs On Oil Theft: The Truth Is Gradually Coming Out 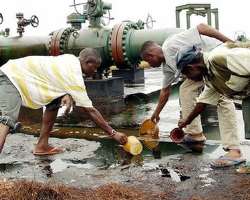 
By: Ifeanyi Izeze
It all started when the Managing Director of Shell Petroleum Development Company (SPDC) Mutiu Sunmonu, said in Abuja that instead of gallivanting to European and other foreign countries to seek for help on tackling crude oil theft, the Goodluck Jonathan administration should move against ” principalities and powers in high places,” who are the sponsors of crude oil theft in the Niger Delta.

Mr. Sunmonu, who made the statement at the recently concluded Nigerian Oil and Gas (NOG) 2013 Exhibition and Conference, compared the stolen crude business to the drug business that had couriers, small dealers, and sponsors. The Shell boss said though it is commendable for Nigeria to take the initiative to discuss with foreign countries suspected to hold the proceed from the sale of stolen crude oil, the problem can be easily solved if the sponsors are found out and dealt with.

His words: “The truth is that the small (criminals) in the creeks of Niger Delta bursting pipelines and stealing crude oil are not working for themselves. Like the drug cartels around the world, they are being sponsored by big principalities and powers in high places, which the government should go against if the fight against crude oil theft is to be won.” The Shell man’s outburst obviously did not go down well with the Presidency which through the Special Assistant to the President on Amnesty, Kingsley Kuku responded and point blankly accused multinational oil companies of complicity in the increased spate of crude oil theft in the Niger Delta saying the companies are aware that their employees engage in oil theft in the Niger Delta region and do nothing about it.

He said Ã¢â‚¬Å“The best you can find the level of Niger Delta people or some merchants of this trade are those doing menial jobs in it.

“You will need high grade vessels and where you cannot load your illegal or oil theft, you are definitely going to find yourself in a mess where you will have to pay huge sum for demurrage, how many Nigerians have the capacity to do that? Very few people,Ã¢â‚¬ he said.

“So you have a situation where some pipeline protection contractors empowered by the oil companies, this is not about NNPC, is not about PPMC. You know almost every oil company has pipeline protection contract, pipeline surveillance contract for local security contractors. The same people who are meant to be securing these pipelines participate in oil theft. So the oil multinationals must look inwards their contracting process, their procurement process, look at the status of some of their vendors and security contractors, x-ray them, review their processes very well and deal with the issue of oil theft as it affects participation in house in the oil and gas industry.Ã¢â‚¬ At least this is the first time we are getting frank engagement from the two major culprits in this embarrassing menace of crude oil theft.

The multinational operators strongly believe the “government people” are involved in the scheme while Government as expressed, also strongly believe staff of the operating companies are solely responsible for the high tech tapping and haulage of stolen crude from their own facilities across the Niger Delta.

Question: Why are the multinational operators particularly Shell, Agip and Chevron refusing to share whatever intelligence they have with the Police, SSS, Navy or at worst with the NIA or even the DPR? Is it not curious that the multinationals claim they bear the highest brunt of this criminal activity and yet are not ready to go all out to expose those suspected to be behind the various cartels running this crude oil stealing racket?

These same foreign oil companies have deliberately refused to tell us exactly how much oil and gas they pump out of our grounds every day. They have also refused to transparently say whether all they pump out on daily basis is the much they declare. All the figures of the volume of crude oil stolen from the Niger Delta that we are being bombarded with on daily basis are all “plays.”

 Why has it become a hide and seek thing for the operators to say for certain what they lose to these thieves (both the human small thieves and the ghost big ones)? By training, I know very well that from every oil well completion data and production history and at every giving point in time, the owners of the well know for sure what comes out of every oil well on daily basis and knows what to expect at the flowstations from all the wells in a field. They know how much crude oil and how much formation water expected to arrive each flowstation before separation/scrubbing because the fluid flow is metered in their operation at least till the crude oil gets to the export terminals where so many other manipulations happen. So who is fooling who?

Is it not curious that the oil thieves don’t burst pipelines carrying mixture of crude oil and formation water? So they know which segment of the pipeline route (the lines linking flowstations to the export terminals) to burst to get pure oil? Can anybody say this is not being done with the collaboration of people who are well knowledge of production and metering operations? It is not a lay man’s thing because the oil thieves don’t have flowstations to separate oil from water and even dissolved gas before loading into barges. If it did not take the Nigerian Maritime Security and Administration Agency (NIMASA) to block NLNG vessels over the recent tax rift, why has NIMASA been looking the other way while oil thieves load their vessels offshore with crude stolen from facilities onshore and neashore?

That means the oil operators may be true afterall in accussing Ã¢â‚¬Å“principalities and powersÃ¢â‚¬ in, around or near government particularly the Presidency. This is not a Jonathan thing because this crime has been on well before Jonathan became president so anybody trying to play politics with this is only trying to be mischievous. If you say the scale has changed, so what was it before? Abeg make all of una go rest!