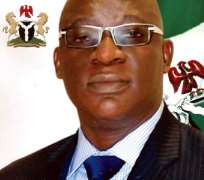 SAN FRANCISCO, July 18, (THEWILL) – The Urhobo community of Uvwiamuge – Agbarho Community in Ughelli North Local Government Area of Delta State betrayed emotions on Thursday as the remains of the late Senator Pius Ewherido, were brought home and laid in state at the Urhobo Cultural Centre in the sleepy town.

Many indigenes of the town wept uncontrollably as the remains of the senator were moved into the Centre in a motorcade as Ewherido was eulogised at the valedictory session that was held for him.

Opening the floodgate of the eulogy, President General of Urhobo Progress Union (UPU), General Newton Patrick Aziza (rtd), said the Urhobo nation has lost a rare gem, a great leader, a democrat and an astute legislator.

Aziza noted that Ewherido had distinguished himself in his two years at the Senate as a legislative activist, a brave debater and a sponsor of people-friendly bills and motions.

He therefore urged the Urhobo nation to mobilise and face the titanic challenges ahead even as they mourn the passage of Ewherido, noting that the Urhobo nation had weathered through similar tribulations in the past and emerged more united and stronger.

“The UPU calls on all Urhobo people at home and the diaspora to remain calm, resilient and focused in order to surmount the current challenges.

"Senator Ewherido devoted his entire political career to the realisation of the Urhobo manifest destiny to be restored to the premier positions of politics and development as guaranteed by our endowments in natural resources and as the most populous group in Delta State,” Aziza said.

The retired General said the Urhobo apex cultural body was proud of Ewherido for his courageous defense and promotion of Urhobo national aspirations.

He noted that the late Senator’s prodigious figure and charming charisma had restored the dignity, honour and hope of the Urhobo people to their bewilderment.

“In his primary constituency of the Delta Central, Senator Ewherido left behind a splendid legacy of care, compassion, and love for the grassroots segment of the electorate. Hundreds of financially handicapped people, enterprise owners, youths and students benefited from his generous philanthropy,”Aziza disclosed.

"His numerous scholarship awards and endowments for Urhobo students and scholars are eloquent testimonies of his humanitarian effort."

In his contribution, the 1st Vice President of the Urhobo Progress Union, (UPU), Chief Tuesday Onoge, advised the Urhobo nation to reflect on the events that led to the sudden departure of Senator Ewherido even as he urged them to look beyond the immediate lure of big money and make wise decision for his replacement.

“The sudden demise of our dear senator has left a big vacuum for the confused and weary Urhobo people. It is obvious that the big shoes left behind by Senator Pius Ewherido shall be difficult to fill, if not near impossible,“ he said.

He warned that the choice of Ewherido’s replacement should not be treated on the basis of political party only, saying the choice must “represent a sober choice, the best, and a patriot, within the Urhobo political class, and one who is capable of carrying the aspiration of the people back to Abuja.”

The elder brother of the late Senator, Rev Fr. Anthony Ewherido, expressed gratitude to President Goodluck Jonathan, the Senate, House of Representatives, Governor Emmanuel Uduaghan, as well as the Delta State House of Assembly and others who have being there for the family during their ordeal.

He said the death of their brother was a painful sacrifice the Ewherido family had made for the Urhobo nation and therefore pleaded with the Urhobo people not to allow their sacrifice to be in vain.

Speaking about the circumstance of his death, he urged the people to disregard any rumour they might have been hearing, saying his late brother had stroke three days before his death.

The cleric used the opportunity to call on the elders of the Urhobo nation to preserve their legacy and make their parts straight so that the Urhobo nation will regain its pride of place in the Nigerian polity.

The valedictory section was attended by sons and daughters of Urhobo land.

A vigil service was expected to be held in honour of the late senator at the Mother of Redeemer Catholic Church, by Airport Junction, Effurun Wednesday evening.