WEMBLEY ON FIRE, AS MAN U, ASTON VILLA BATTLE IN 2010 CARLING CUP FINAL 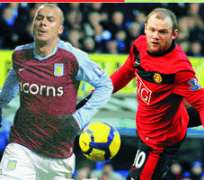 Wembley on fire
…As Man U, Aston Villa battle in 2010 Carling Cup final

By MADUABUCHI KALU
Sunday, February 28 , 2010
http://www.nigerianbestforum.com/blog/wp-content/uploads/2010/02/wembly-fire.gif Today, Manchester United and Aston Villa will battle for supremacy over the first silverware of the season – the Carling Cup. The battle line was drawn on Wednesday, January 27, when Man United beat Manchester City 3-1 in the second leg of the semi-final match at Old Trafford.

Man City had beaten its city rival 2-1 in the first leg of the semi-final match at the City of Manchester Stadium, home of Manchester City Football Club. But Man United won on 4-3 aggregate.

It was that victory that set the Red Devils up against the ever-stubborn Aston Villa, which had earlier qualified for the final having confirmed its supremacy over Blackburn in the two-legged encounter. Villa beat Blackburn at home 0-1 and confirmed the feat in the second leg at Villa Park with 6-4 score line (7-4 on aggregate).

Today's battle will take place at the magnificent Wembley Stadium in London, which is one of the most revered stadia in the world. Every player the world over craves to play at Wembley. It is expected that the 90,000-capacity stadium will overflow its brim, as great number of spectators is expected to watch the game live.

This is the first time Man United and Villa will be meeting in the final of the Carling Cup in years. On paper, one will give the day to Man United taking into account its pedigree. The club has won the Carling Cup and many other trophies on several occasions, but the same cannot be said of Aston Villa.

However, it would be wrong to write Villa off, especially at this stage of the competition. At the moment, Villa is proving to be one of the toughest teams in the Premiership. Ask the likes of Chelsea and Liverpool and they will tell you of Villa's recent feats better. Little wonder today's encounter will surely be a cracker.

Moreover, Villa has been consistent over the years in the Premier League and as the years pass by, the team is becoming stronger, pushing very hard to break into the 'big four' in the League.

Both sides can boast of sound technical benches. Inasmuch as Sir Alex Fergusson is a respected tactician, Martin O'Neil is not a slacker by any means. So, it is expected that both men will match each other squarely.

On the field of play, both sides, as well, have the players that can wreck havoc against their opponents with any momentary lost of concentration on the opposing side. That is why every side must be on guard all through the duration of the game.

Aston Villa plays good football, and so is Manchester United, and both are hungry for glory. But it seems that Villa would be hungrier this time around since it has not drank from the Carling Cup for quite some time now. But Man United does not give a damn, because, for the Sir Alex Ferguson's boys, all that matters is winning silverware to enrich their cabinet.

Every side, therefore, is perfecting its strategies in order to make history today by winning the first trophy of the season. It is going to be entertainment glamour, even as fans will get value for their money.