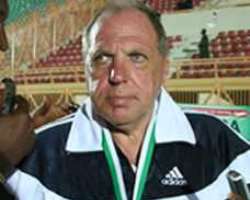 Nigerians expect to know, by today, the new foreign coach who will guide the Super Eagles to the World Cup in South Africa in June after last night's crucial meeting by the Nigeria Football Federation.

The Technical Committee of the nation's football governing body, yesterday, concluded its weeklong interview of the short-listed coaches out of more than 16foreign tacticians earlier touted for the plum job.

But Maurice Cooreman has insisted that he can do a better job than whoever emerges as the new Super Eagles' gaffer.

The Belgian tactician, who has spent over a decade in the country, winning the domestic league title with two different teams – Ocean Boys and Enyimba International – said that his vast knowledge of the Nigerian environment makes him the best man for the job and wondered why the NFF ignored him in the search for a replacement for Coach Shaibu Amodu.

'I've stayed long in Nigeria and I'm now a Nigerian. After 10 years in the country, I know a lot about Nigerian football and I know what Nigerians want. I learn everyday. I know the administrators and the players, which is a very strong advantage I have ahead of all the other foreign coaches linked to the Super Eagles' job,' the Kaduna United gaffer began in an exclusive chat with Saturday Sunsport in Aba last weekend.

'Berti Vogts didn't know the Nigerian environment, he didn't know that a lot of people worked against him while he was in charge of the Super Eagles. If you don't know about the politics in Nigeria, you would be killed,' he went on.

He noted that frequent changes of coaches does not augur well for the national team. According to him, 'any country you bring in her coach would like to introduce his country's pattern of play into the Eagles and as many coaches as you bring, will like to come along with their different patterns and at the end, Nigeria will have no definite style of play,' the former Ocean Boys' tactician stated.

Cooreman said he not only understands the mentality of the average Nigerian player, but also knows the strong points of Nigeria's opponents at the forthcoming World Cup in South Africa.

'I can make the Eagles super again.
If given the job, I'll select players on merit, rather than basing my selection on big names. I know the strong points of Nigeria's opponents at the World Cup -Argentina, South Korea and Greece. All we need is to play friendly matches to fine-tune our strategies. With good preparation and right training, we can do well at the World Cup in South Africa,' he said.

He regretted that the nation's football authorities wouldn't give him the Eagles' job because he would not demand for too much money.

'The NFF won't give me the Eagles' job because they're looking for coaches who would ask for too much money so that they (NFF) could have their own cut. Some of the coaches being linked to the Eagles' job would ask for as much as N300million. But I can get the job done with just about N10million. At my age, money is not my problem anymore. I love Nigeria and I love to work for Nigeria.

'My strong point is that I relate well with my players, but I don't tolerate indiscipline in my team. My players respect me. They know what I want. When you earn the players' confidence and they earn yours, it makes the team strong and the work becomes easier. Wherever I go, the players love to work with me because they enjoy my training sessions.'

The former Enyimba International coach faulted the use of John Mikel Obi as an attacking midfielder in the Super Eagles, while he plays as a defensive midfielder at his club, Chelsea.

The man, who has discovered many players in Nigeria, including Taye Taiwo, Damian Ude, Mike Eneramo and Elderson Echiejile, said both Taiwo and Echiejile could play at the same time in the Super Eagles.

'Taye Taiwo is no longer offensive both at Marseilles and Super Eagles. He was playing better under me. Elderson Echiejile can play in the midfield with Taiwo as fullback. If I handle the Super Eagles, I will play both players at the same time.'

Cooreman disagreed with Amodu that the players in the domestic league are not good enough for Super Eagles, stressing that he would beat the current Eagles with a selected home-based side with only a month's preparation.

'There are a lot of players in the Nigerian domestic league. If I train a home-based selected side for a month, I'll beat the current Super Eagles,' he declared.