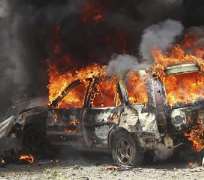 Five policemen were wounded when their vehicle was blown up in the Somali capital Mogadishu on Tuesday, a police officer said, in an attack claimed by the Islamist militant group al Shabaab.

Police official Abdikadir Mohamud, who was in the area, told Reuters it was not clear whether the bomb was planted in the vehicle in the Bakara market or hurled at it.

Gunfire heard after the blast was from security forces, Mohamud said. "Fire was opened in the air to disperse the converging crowds to minimize casualties," he said, adding that no civilians were hurt.

Somalia is attempting to rebuild after two decades of civil war and lawlessness, backed by international aid aimed at preventing it from becoming a haven for al Qaeda-style militants in East Africa.

The assault is the latest indication of the ease with which the Islamist rebels, ejected from Mogadishu by African peacekeeping forces about two years ago, have been able to organize and threaten the government's fragile security gains. Last month al Shabaab attacked a United Nations base in Mogadishu, killing 22 people.

Sheikh Abdiasis Abu Musab, the spokesman for the group's military operation, said the device used in Tuesday's attack was "a well-timed remotely controlled bomb." He said three people were killed, but the police officer put the casualty figure at five wounded.

The government has said it needs more international training and other support to build up its security forces. For now, it still relies heavily on African peacekeepers to protect vital facilities.