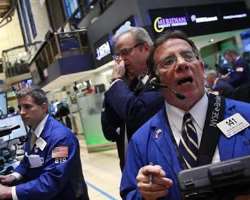 The dollar climbed to a three-year high on Monday and gold was hovering near a three-year low after last week's strong U.S. jobs data fed expectations that the country's central bank could soon wind back stimulus.

The dollar index .DXY, which measures the greenback against a basket of major currencies, rose to 84.588, its highest since July 2010, before a slight dip in early European trading left it at 84.450.

Friday's U.S. jobs data bolstered the view the Federal Reserve will soon start reducing its long-running stimulus program, but analysts are now wondering whether the dollar's recent rise can continue at the same pace.

"Clearly the dollar is on the front foot and so the question is: can it sustain the momentum?," said Rabobank senior currency strategist Jane Foley.

"As it gains ground it acts as implicit monetary tightening so that could make some of the Federal Reserve governors quite nervous. I do think there will be plenty of opportunity to take some profits in these dollar positions."

Investors expect Greece to reach a deal over its latest aid payment at a meeting of euro zone finance ministers later in the day, and there was relief after weekend moves to calm Portugal's political crisis.

Europe's bond markets were calmer as a result with benchmark German Bunds and euro zone periphery debt all higher after last week's turmoil in Portugal and Greece and Friday's strong U.S. data.

EGYPT TENSIONS
The Fed's plans to cut back its current $85-billion-a-month bond buying program has been the main driver of financial markets over the last month, driving up global bond yields and triggering big swings in other asset markets.

Gold, often favored as a hedge against inflation which can be a by-product of stimulus programs, was near a three-year low at $1,227.59 an ounce after its recent sell-off.

Emerging markets have been particularly hard hit by the Fed's policy shift. Investors had directed much of the cheap Fed cash into emerging assets in search of higher yields and that trend is now reversing as investors look to increase their exposure to the United States again.

The Indian rupee hit a record low on Monday, leading declines among emerging Asian currencies, with sentiment also bruised by China's plan to choke off credit in a bid to force consolidation in industries plagued by overcapacity.

Elsewhere, the rising U.S. dollar nudged Brent crude oil futures below $108 a barrel, although an escalation of political tensions in Egypt prevented too much slippage.

State television said 42 people were killed on Monday in Cairo, when the Muslim Brotherhood said shots were fired at supporters of deposed President Mohamed Mursi near the military building where he is being held.

"What's underpinning the strength in the oil market is the tensions out of the Middle East," said Ben Le Brun, an analyst at OptionsXpress in Sydney. "That's going to continue to put a floor under oil prices."