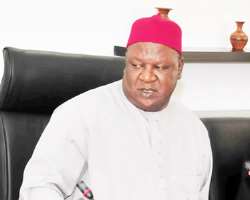 SENATOR ANYIM PIUS ANYIM, SECRETARY TO THE GOVERNMENT OF THE FEDERATION (SGF)
Listen to article

All the stakeholders disclosed their positions at a public hearing organised by House Committee on Governmental Affairs on two bills seeking to amend the National Honours Act.

One of the bills seeks to subject the confirmation of any award on the National Assembly as well as powers to revoke due to misconduct on the part of the awardee.

The Bill also seeks to prohibit serving public officers, elected or appointed, from being conferred with the award while it also seeks to increase the fine payable upon conviction from N100 to N1m.

Justice Belgore, instead, appealed to the lawmakers to shelve any attempt at stripping the President of the powers to award the National Honours on those he deemed fit.

The NBA, in its presentation, aligned with the former CJN on the two issues and stated that limiting the number of awardees to 100 would not be fair on deserving Nigerians.

According to the NBA, the current 450 limit should be left open.

Civil Society Legislative Advocacy Centre (CISLAC), on its part, agreed with the amendment that the powers to confirm the award should reside with the National Assembly.

Besides, the group noted that the integrity of the award might have been responsible for the rejection of the award in the past by some prominent Nigerians due to the questionable character of some of the recipients.

Speaker of the House,Hon. Aminu Tambuwal, while declaring open the hearing, said the exercise was in line with the responsibilities of the House to look critically into all issues of national importance.