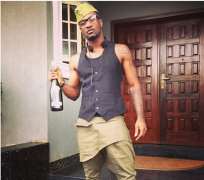 At last, one member of P-Square music group, Peter Okoye has tasted the expensive champagne worth about £1.2million (N300million). The singer announced this on twitter where confirmed to have received the world's most expensive drink made by Alex Amosu.

The top businessman, after Peter had confessed that he can't buy the drink, sent him a bottle, which the singer confirmed online. Alex wrote, "as promised, let (referring to Peter) them know what Goût de Diamants champagne-- Taste of Luxury tastes like."

A belated Peter later wrote, "Alex finally sent me a bottle. Thanks bro."