Repentant And Fearful Tonto Dikeh Advises, ‘Say No To Drugs And Weed’ 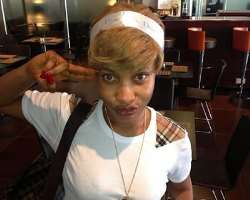 Not many would have ever imagined that there would be something or anybody that could tame controversial Nollywood star, Tonto Dikeh, but the National Drug Law and Enforcement Agency (NDLEA) has successful done that.

Over the weekend, news went viral that the actress might be investigated over a post and picture on marijuana the actress put online, which generated controversies. The news forced Tonto to deny posting the words and pictures even though it was done on a platform she runs.

Showing remorse and probably shaken by the NDLEA threat, Tonto took to twitter to advice her fans to stay away from drugs and marijuana, which she reportedly earlier encouraged.

She wrote today, “all the best. Do some good things this month (July) and Say No To Grugs and of course, Weed (marijuana).”

Who says the dog does not recognize the voice of its owner even when its goes gaga on others?

Tonto Dikeh May Get 15 Years Jail Term Over Marijuana Picture