Why Obama visited Senegal, Tanzania and not Nigeria, Kenya 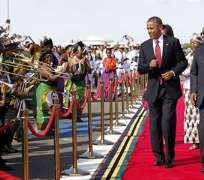 
Two capitals in Africa are simmering with umbrage for President Barack Obama not because the National Security Agency (NSA) is spying on their countries or that the African Command (Africom) is militarily reoccupying the continent. They are neither mad at Mr. Obama for sabotaging international efforts at reducing the scourge of global warming and greenhouse gas pollution nor are they perturbed by the Obama's administrations lethargic implementation of the United Nations International Convention on the Elimination of All Forms of Racial Discrimination (CERD) provisions. These aforementioned issues do not interest the governments in Kenya and Nigeria that much. Instead Nairobi and Abuja political elites are vexed because their corruption, impunity, and lack of transparency have not endeared resounding endorsements from Washington.

In Kenya the dominant economy of East Africa, the children and associates of the politicians that frustrated President Obama's father after he returned home from abroad, are now at the helms of power in the government and the opposition parties. After the senior Obama got his education and went back to Nairobi he was hindered from participating meaningfully in government and merging his new ideas with the local systems. What followed in Kenya were systems of patronage and tribalism that rewarded ineptitude. But the beauty of the setup in Kenya are such that the politicians reserve the rights to get paid exorbitant salaries, allocations, and bonuses without meeting the demands of regular Kenyans. The situation is so corrupt that politicians actually incite violence and kill for power. The present president of Kenya Mr. Uhuru Kenyatta is facing crimes against humanity charges at the international criminal court.

Similarly, Nigeria the so-called giant of Africa and the dominant economy in West Africa has political elites who have been fervently anticipating the visit of the United States president.  They are eager for the opportunities to put on their 'one thousand five hundred' apparels so that they can parade around Abuja with Mr. Obama. Government officials have normalized the fleecing of the national treasury with the addition of immunity laws/clauses to shield them from prosecutions. These are built in incentives to continue the do or die modalities of seeking absolute power and remaining in authority. Since some Nigerians believe that they are God's gift to humanity, you can imagine the arrogance of our government officials who are disconnected from the everyday realities of ordinary life.

However, Dodoma the Tanzanian capital and Dakar the Senegalese capital are experiencing uhuru (freedom), electoral participation, and political accountabilities that are the joys of Africans everywhere. In both nations, their governments are responsive to the everyday people and are making investments in their human capitals. Politicians in Tanzanian and Senegal do not earn more monies than President Obama while their people make less than two dollars a day, as is the case in Kenya and Nigeria. The folks in Dodoma and Dakar have paved paradigms that are easily visible even among their Diaspora populations. They present with more cohesiveness, avoid the backstabbing, and really seem to love/care one and another. In the Senegalese and Tanzanian communities they are mostly devoid of the divisions, coldness and selfishness that are synonymous with some Nigerian and Kenyan communities.