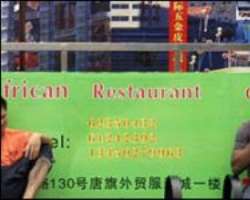 Nigeria MPs have asked the government to investigate the status of Chinese residents in the country, saying some may be staying there illegally.

The demand follows allegations that Nigerians in China, especially those in jail, are being mistreated.

The MPs asked the government to reject a request by the Chinese authorities to cremate the bodies of 30 Nigerians who have died in Chinese jails.

There are an estimated 700 Nigerians currently in prison in China.

The BBC's Chris Ewokor in Abuja says they are mainly charged with immigration, drug or fraud offences.

Trade between Nigeria and China is booming and an estimated 20,000 Chinese people live in Nigeria, he says.

A similar number of people from across Africa are legally in China - and many more are thought to be there unofficially.

In July, a group of Africans staged a rare protest in the city of Guangzhou after a Nigerian man was reported to have died running away from police there.

The Nigerian lawmakers want the government to conduct an audit to determine how many illegal Chinese immigrants there are in the country.

The row comes after the Chinese government, through its embassy in Nigeria, sought permission to cremate the 30 corpses of Nigerian prisoners, saying their relatives cannot be traced.

At a press conference, the head of the House of Representatives Committee on the Diaspora, Abike Dabiri-Erewa, said Nigeria could no longer accept a situation where its people were being "maltreated and dehumanised abroad".

Her colleague MP Samson Osagie told the BBC he believed there should be a "harmonious diplomatic" relationship between Nigeria and China.

But he said Nigerians were not the only people to commit immigration offences.

"Let us find out if all the Chinese in Nigeria are legally resident," he told the BBC's Network Africa programme.

Our reporters says the government is yet to say what action it intends to take.