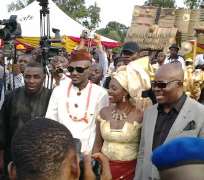 A man identified as Emmanuel Okolo has sued 2face Idibia and his wife, Annie Macaulay for N120 million over photographs allegedly taken at their traditional wedding held in March 3013 in Akwa-Ibom State.

Okolo, who is an Abuja-based photographer, claimed that he was approached through a third party named Ms Chineze Anyaene to take shots at the wedding of the music star in Akwa-Ibom. The photographer further stated that he initially declined the offer because it came from a third party, but changed his decision after consideration. He also said Annie later contacted him after the wedding and requested him to print about 10 high resolution pictures taken.

The matter was heard at the Federal High Court in Lagos by Justice Mohammed Idris, but the trial will start on October 16, 2013.
Both 2Face and his wife were not in court on during the proceedings.