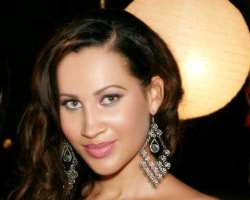 Pretty Nollywood diva, Caroline Ekanem-Danjuma clocked 33 years today. She was born on June 26, 1980 to a Scottish father and a Nigerian mother. The actress became one of the most sought after actress after her role in Chico Ejiro's flick, Deadly Kiss several years back.

The actress is a graduate of Environmental Protection Management, Geography and Regional Planning. She left the industry shortly after getting married to Theophilus Danjuma, and she has gradually returned to the industry with the production of the film entitled, In the Cupboard.

The strikingly beauty would also be adored for her roles in Deadly Kiss, A Second Time, Missing Angel 2 &3, Foreign Affairs, The Twist, Angel and the Beast, Real Love Part 2.