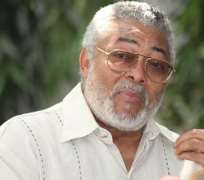 
A former President of Ghana, Jerry Rawlings, is being economical with the truth in his claim that he made no reference to Nigeria corruption and the Nigerian government in a speech he delivered at a conference in Abuja on June 17,  PREMIUM TIMES can authoritatively report today.

A video recording of the event, where the former leader delivered the speech, has punctured his claim, with footages showing Mr. Rawlings not only repeatedly referring to Nigeria, but at a point mocking its government for hounding corruption fighters, characterizing authorities with the now famous pidgin adaptation for bosses: 'Oga at the top.'

Addressing a largely Nigerian audience at a conference on 'Emerging Democracies in Africa: Challenges and Opportunities', Mr. Rawlings accused African countries, of which Nigeria is one, of paying lip service to the fight against corruption, punishing petty thieves and sparing politicians who misappropriate millions of state funds.

He said, 'We cannot continue to pay lip service to the strengthening, empowerment and independent management of our multiple anti-corruption institutions. We live in countries where poor, petty thieves get imprisoned for several years while businessmen who evade taxes in millions of dollars or a politician who misappropriates millions of state funds escape punishment.'

But Mr. Rawlings did not stop there.  As shown in the video below, he went on to narrate  how a former attorney general in his country was widely castigated for fighting official graft, but later celebrated as a hero. As he rounded off his account, Mr. Rawlings asked his audience, which included the President of the Senate, David Mark, if Nigeria had such a hero.

'Yes indeed, you do,' Mr. Rawlings answered. Then, speaking briefly off a prepared text, he added: 'You do. Some of them (Nigerian anti-corruption heroes) are even persecuted by the ogas (bosses) at the top.'

He later offered some clarification that he did not 'know about this one (in apparent reference to whether President Goodluck Jonathan was also hounding anti-corruption fighters). But I know about some in the past.'

He added that Nigerians should firmly support their anti-corruption crusaders to break the cycle of graft that has gripped the land. 'I'm saying you do (have lonely heroes). And they need to fly with boldness.

They need your support if you have to change that cycle. People must learn to profit from right, from virtue and not from vice.'

But in his reaction to PREMIUM TIMES' report of the event, Mr. Rawlings vigorously denied alluding directly or otherwise to Nigeria, and did not say he made additional comments not captured by his prepared speech.

A statement by the former leader's office (which was never sent to this paper by the way) suggested that everything Mr. Rawlings said at the conference was captured by the speech he read.

But the recording shows one of the ex-leader's most vital points, not captured by his prepared text but which this newspaper considered one of the high points of his presentation. It eventually formed the basis for the paper's reporting of the event.

Rather than own up to a remark he made in the open, Mr. Rawlings castigated our reporting, calling it 'libelous and malicious' and warning of a possible lawsuit.

The crux of this paper's reporting of that event was that Mr. Rawlings passed a strong, commendable message to Nigeria (where corruption is currently at an all-time high) and other African countries, given that Nigeria is in Africa, has multiple anti-corruption institutions, and is behaving in the manner the Ghanaian leader highlighted.
PREMIUM TIMES' report had captured the remarks in the context of how it relates to Nigeria - a basic tenet of interpretative reporting.

The former Ghanaian leader also spoke at a time Nigerians were still debating the recent controversial presidential pardon granted ex-convict Diepreye Alamieyeseigha, a former governor of Bayelsa state, who was sentenced to two years imprisonment for stealing billions of naira belonging to his state. Mr. Alamieyeseigha is also a fugitive from Britain where he jumped bail and fled to Nigeria while on trial for money laundering.

But shortly after our report, the former Ghanaian president and the Nigerian presidency mounted a serious campaign of calumny against this paper, claiming Mr. Rawlings never commented on Nigeria corruption during his presentation.

Mr. Rawling's rebuttal was never sent to this newspaper and none of the media outlets to which it was sent bothered to contact us for comments, a practice that again underlines the sorry state of journalism in our country where officials routinely hire fellow journalists  to disparage groundbreaking but uncomfortable reporting by their colleagues.

There is even no evidence that the media outlets who got Mr. Rawlings' rebuttal took time to read through the former Ghanaian president's presentation with a view to determining whether he was misrepresented or not.

The Nigerian presidency, which treated the attack on PREMIUM TIMES as a major project in the last one week, has never been comfortable with this newspaper's factual and uncompromising reporting on national issues.

The regime remained angry that, among several other exposÃ©, this newspaper exposed the discreet presidential pardon Mr. Jonathan granted Mr. Alamieyeseigha and the secret $40million security contract awarded to an Israeli company, Elbit, to spy on Internet communication by Nigerians.

Commenting on the matter Monday, PREMIUM TIMES Acting Managing Editor, Idris Akinbajo said, 'It's a shame that Mr. Rawlings and the Nigerian presidency would peddle a claim that Nigeria wasn't among the countries Mr. Rawlings referred to.

'Forget the fact that Mr. Rawlings even specifically addressed his speech to Nigeria and Nigerians, is Nigeria not part of the Africa he is claiming to have addressed? He should tell us the specific countries he had in mind in his speech  and his justification for trying to exempt Nigeria from his definition of Africa.'

Mr. Akinbajo continued, 'We respect Mr. Rawlings' preference for diplomatic niceties towards the Nigerian government, but we also insist that Nigeria is part of a whole (Africa) he commented about in Abuja. And that he indeed spoke about Nigeria in his presentation. There is no doubt about that.

we ask them to also expand their imagination to understand the framework of interpretative reporting.
'Let it be known that politicians may be forgiven if they do not appreciate the protocols of interpretative reporting but those who make claims to professionalism at the corridors of power today, especially Abati and Omokri, should look themselves in the mirror again.'