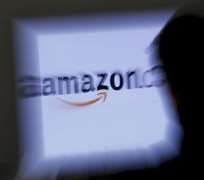 France's Socialist government aims to introduce a law preventing online retailer Amazon from offering both discounts and free delivery for books in France, the culture minister said, arguing this amounts to unfair competition.

Aurelie Filippetti said the government was looking for the right time to introduce a ban on the practice, which book sellers say threatens their business model by allowing Amazon to undercut their prices.

"I'm in favor of ending the possibility of offering both free delivery and a five percent discount," she told BFM news television on Friday. "We need a law, so we're going to find a legislative window to introduce one."

Amazon in France declined to comment.
Filippetti's remark underscored tensions between the French government and U.S. online firms such as Amazon and Google, which have been criticized for paying too little to the creators of cultural or news content.

France, like other European countries, bans retailers from discounting books more than 5 percent from a sale price set by the publisher. This is to prevent small sellers from being crushed by giant retailers that can absorb bigger discounts.

Guillaume Husson, spokesman for the SLF book retailers' union, said Amazon's practice of bundling a 5 percent discount with free delivery amounted to selling books at a loss, which was impossible for traditional book sellers of any size.

"Today, the competition is unfair... No other book retailer, whether a small or large book or even a chain, can allow itself to lose that much money," he said, referring to Amazon's alleged losses on free delivery.

The SLF union had sued Amazon for unfair competition before a French court, and the case was still being reviewed, he added.

France settled a dispute with Google in February over whether it should pay content providers for linking to news articles, which resulted in the firm creating a 60-million-euro fund to support the press. France made a new push against Google this week, arguing it broke French privacy laws.

Filippetti's comments raised the possibility of a similar public spat with Amazon.

"This is not just in France," she said. "Amazon's behavior, and the risks it poses for the survival of a whole network of book stores and the entire chain of book production, are obvious in Britain and in the United too."