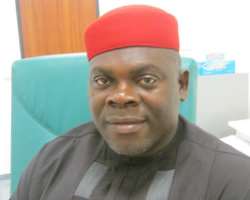 A member of the House of Representatives, Hon. Ossai N. Ossai, representing Ndokwa/Ukwani Federal Constituency of Delta State and a 2015 Governorship hopeful has been charged to court for forging election result sheets he tendered at the Election Tribunal.

The charge arose out of a petition by Hon. Olisa Imegwu, former Speaker of the Delta State House of Assembly and a candidate in the last House of Representatives election in the same Constituency in Delta State.

In the charge sheet from the Festus Keyamo Chambers, Hon. Ossai who recently donated Generators and Motorcycles to some members of his constituents to announce his Governorship ambition, forged the Independent National Electoral Commission’s INEC result sheets and tendered same at the Tribunal hearing.

According to the charge sheet, Hon. Olisa Imegwu initially won the election at the polls and was sworn in. Hon. Ossai N Ossai consequently lodged a petition at the Election Tribunal, where he got a verdict upturning the election in his favor - a verdict that was affirmed by the Court of Appeal.

The case has been assigned to Justice Okolosi of High Court 3, Asaba.