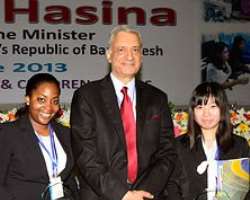 Nigerian national recognised for addressing how and why governments should encourage women in leadership.


A Nigerian woman, Nonyem Obiageli Odili was honouredin the presence of around 2,000 people gathered at the 10th Commonwealth Women's Affairs Ministers Meeting (10WAMM) held 17-19 June 2013 in Dhaka, Bangladesh for proffering reasons and ways governments could promote women's involvement in leadership and policy-making processes in their countries.


Bangladesh Prime Minister Sheikh Hasina and Commonwealth Secretary-General Kamalesh Sharma presented Odili with a trophy for taking the 1st position under the 18-29 age category in the Commonwealth Women in Leadership Essay Competition which focuses on engaging the youth in promoting gender equality and women's empowerment within the Commonwealth. Malaysia's Tang Sze Lin was also honoured for taking 1st place in the 15-17 age category.


A panel of 22 adjudicators, in consonance with the 10WAMM theme of 'Women's Leadership for Enterprise', selected Odili's essay amongst entries from participants across the Commonwealth's 54 nations for best highlighting the importance and significance of having more women represented in the economy and in decision-making processes, global financial markets, leading banks and national policy making bodies.


Odili in her essayundertook a comparative analysis of select countries in the Commonwealth to highlight the “overwhelming number of women” excluded from leadership positions globally; while pointing out that a progressive democracy can only be achieved with the involvement of women - the significant majority of the world's population - in the decision making process. She evoked a change of consciousness in redefining a woman's role with sensitivity to each nation's cultural and religious beliefs. Drawing a link between gender inequality and domestic violence, war, poverty, gang rapes, national unrest and slow economic growth, supported with data from the Commonwealth Plan of Action for Gender Equality 2005-2015, Odili concluded that achieving gender equality is not about using quota systems of positive discrimination to favour women into leadership positions but about governments empowering women with education and necessary skills.


“Without key implementations in place, such as education, encouraging women in leadership is like drilling an oil well with an office pin,” Odili said.