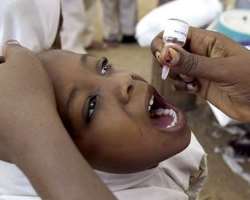 The World Health Organisation, WHO, and the United Nations Children's Fund, UNICEF, said Nigeria recorded a 50 per cent decline in the number of polio cases in the second quarter of this year.

Nigeria along with Pakistan and Afghanistan are the only three countries in the world where polio exists.
This is contained in a statement signed and issued on Wednesday in Abuja by Geoffery Njoku, a Communication Specialist at UNICEF.

'Nigeria is making progress toward the target of stopping polio. To date in 2013, Nigeria has reported a 50 per cent decline in the number of cases with 25 cases in nine states, compared to 54 cases in 10 states for the same period in 2012.''

The statement noted that more than 60 per cent of the cases in 2013 occurred in the security-compromised areas of Borno and Yobe states which offered limited access to children for vaccination.

It said that Nigeria's polio programme had surged forward and was making progress as outlined by recent report of the global Independent Monitoring Board for polio eradication.

It said that the number of un-immunised children through routine immunisation had declined in the past several months due to increased focus on improved routine services.

'The WHO and UNICEF are committed to continue supporting the government of Nigeria in their effort to improve the well-being of women and children,'' the statement added.