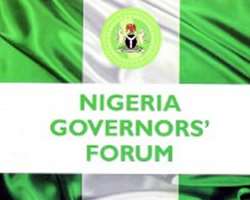 SAN FRANCISCO, June 18, (THEWILL) – Hearing in a suit seeking to de-register the Nigerian Governors’ Forum (NGF) will continue on July 4 at the Federal High Court in Abuja.

The suit filed by the Northern Coordinator, Network for Defence of Democracy and Good Governance (NDDGG), Tijani Ali Danjuma, seeks to compel the Corporate Affairs Commission (CAC) to de-register the NGF.

Joined as defendants in the suit are the NGF and the CAC.

While adjourning hearing in the case till July 4, presiding judge, Justice Adeniyi Ademola, on Tuesday, refused NGF's application to stay further proceeding in the case as he rejected the argument of NGF's counsel, Okunade Olorundare, SAN, that the court should either hear his preliminary objection first or entertain his application for a stay of proceedings pending appeal.

It would be recalled that the court had on April 29 adjourned to Tuesday for hearing of all pending applications, particularly the preliminary objection and originating summons.

On Tuesday, the parties were expected to argue both applications, but Olorundare and Nasiru Tijani (representing CAC) objected, insisting that the court must first hear their objections.

Olorundare, who said he held the brief of Lateef Fagbemi, SAN, later told the court that he had filed an application before the court seeking a stay of its proceedings pending the determination an appeal he filed.

He said his appeal was against the court's decision on April 29 to hear the substantive suit together with the defendants' preliminary objection.

He urged the court to either hear his preliminary objection first or hear his application for stay.

But counsel to the plaintiff, Tubotamuno Dick, described Olorundare's argument as part of the defendants' antics to frustrate the prompt hearing of the case.

He argued that the court's decision to hear both the substantive suit with the objection was in line with the provision of Order 29 of the court's Civil Procedure Rules.

Dick urged the court to discountenance the defendants' argument and proceed to hear the case the way it had planned.

In his ruling, Justice Ademola held that his decision to hear the applications together was informed by the provision of Order 29 of the Federal High Court Civil Procedure Rules.

He averred that Olorundare's argument, supported by Tijani, was a ploy to stall the court's business for the day.

He therefore overruled Olorundare's argument , saying it was misconceived.

The plaintiff is praying , among others, for an order de-registering the NGF on the ground that it was "erroneously registered by the CAC."

Arguing that the NGF was an illegal body, he formulated four questions for the court's determination and sought three declarative reliefs and an order.

He also asked the court to determine:
*Whether an "office" can have fundamental human rights as provided under Chapter Four of the Constitution, particularly in relation to the right to freedom of association as provided under Section 40 for it (the office of governor) to qualify as Trustee under Section 592 of the Company and Allied Matters Act (CAMA) 2004 and for it to be registered as an Association under Part C of CAMA?

*Whether, assuming that the office of the governor of a state is the person occupying it, can he constitutionally or legally form an association under Section 40 of the Constitution, using the office whilst he holds it?

*Whether the 2nd defendant (CAC) was not in error when it misdirected itself and registered the 1st defendant as an association in 1999?

He asked the court to declare that, assuming the office of governor of a state was the person occupying the office, he could still not constitutionally or legally use the office to form an association while he held it.

The plaintiff is also praying the court to order CAC to de-register or dissolve the NGF in accordance with the provision of Section 608 of CAMA.