Okada Ban And The Insensitivity Of State Governors 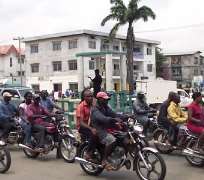 
By Theophilus Ilevbare
'We have okada too in Rwanda. It is a lucrative business. A good number of people are doing okada business in Rwanda. But their activities are well-regulated. There are rules and regulations that define the limit of their operation.”

'We also organise them into groups, such as association of owners and association of operators. The groups help in ensuring that the rules and regulations are duly observed. Because we have rules, institutions and structures in place, we do not have much problem with okada operators.” - Rwandan President, Paul Kagame.

That simple. There goes a responsible leader who understands the struggles of his countrymen. He has gone the extra-mile to ensure he sustains the source of livelihood of commercial motorcycle operators in his country irrespective of their place on the rungs of the social ladder.

Asking commercial motorcycle operators popularly known as okada to find alternative means of livelihood is the height of insensitivity by Nigerian state governors to the plight of compatriots. If there were better options they wouldn’t be riding bikes in the first place.

Okada restriction in some parts of Lagos and Delta states in recent months have now berthed in Edo. Governor Adams Oshiomhole upon his re-election reiterated that there was no plan to ban Okada; 'It is a class issue and I belong to the working class, so I cannot ban Okada. First, I believe that okada is a response to certain deficit in our intra-urban transportation system'.

But on 11 June, 2013, all of that changed when the state government announced that there will be a ban (or restriction) on the activities of commercial motorcycle operators (bike riders) across Egor, Oredo and Ikpoba-Okha Local Government Areas. The ban was extended to Oluku and Aduwawa which were not listed in the three local government areas but are part of the Benin City Metropolis. I believe that the Comrade Governor, like Fashola of Lagos, was ill-advised.

It is a policy that will further impoverished the people that have already been pauperised by similar anti-people moves in the past like the fuel subsidy removal that was vehemently resisted by Nigerians to no avail.  It is not accidental that most states where okada have been banned have Governors in their second terms. To test how unpopular such a move is, very few Governors will risk re-election by banning commercial motorcycles in their first term. Governor Fashola, “Before election in 2011, gave helmets and vests to okada riders.' An opposition spokesman was quoted as saying. 'The okada riders were behind Fashola everywhere he went to campaign, then they were not armed robbers and they were not causing accidents. Weeks after he got the second term, he started chasing them everywhere.'

It is a fallacy of hasty generalisation, that all Okada riders are armed robbers, hence, responsible for the rise in crime rate and all accidents on Nigerian roads. Such must be premised on some kind of prejudice for them or at best, lazy reasoning. We cannot absolve okada riders from occasional robberies, but to put the blame on them squarely for all robbery incidents in the state to warrant their ban is tantamount to giving a dog a bad name so it can be hanged. Are the so-called keke NAPEP replacements and regular vehicles not used for same? Shouldn't we also ban them from Nigerian roads? The restriction on okadas is not only a lazy approach to problem solving, but pedestrian, unjust, inhumane, callous and vicious. Taxis and buses are used for the famous ‘one chance,’ why weren’t they banned? Militants and pirates use speed boats to bunker oil and attack ships on the high sea.

Were they banned even at the height of the Niger-Delta militancy? For years, Nigerian airlines have become flying coffins leading to the death of hundreds, not even the lives of prominent Nigerians were spared. Aircrafts and air travel should have been banned! It becomes glaring why okada riders are singled out for ban, throwing their families and dependants deeper into the abyss of privation. For such an anti-people move to be taken somewhat hastily without due consultation with stakeholders, to a large extent, is an indication that these state Governors have lost touch with the common man.

A hardened hoodlum who wants to steal will find a convenient means of transportation to do so. There are thieves who rob on foot. This writer have been robbed in the cool of the evening by foot robbers with passers-by, onlookers and vehicles on either side of the road. Moreover, I don't see anything that will stop a bandit from robbing with a motorcycle even after the ban of okada. It is the height of irrationality that a ban on commercial motorcycles is now a measure for reducing crime and accident rate in state metropolis. People should not loss their livelihood to the incompetence of the institutions constitutionally empowered to ensure safety on roads. The onus is on the government to live up to its responsibilities.

Governor Oshiomhole of Edo state, seeking comfortable parallel to hinge his anti-people and unpopular restriction of bike riders said it is now increasingly evident that many of the kidnappers in the state are okada riders. But how an okada rider can successfully kidnap his target who is probably driving in an SUV or some fast moving car beats me.

The ban of okada was also premised on the loss of lives from okada accidents. I wish to ask the FRSC and the Nigerian Police in these states, is okada the only cause of road accidents? Statistics have shown that accidents on the high way predominantly involve vehicles. How some state governors came to the conclusion that the panacea to the carnage on Nigerian roads is to ban okada but not cars - if we're to go by simple logic – remains a mystery to me. If the state governors have failed in their responsibilities to fix the roads and reposition the FRSC and police to do their jobs on the high way, the source of livelihood of okada operators should not be sacrificed.

Residents who live in remote locations will face untold hardship accessing major roads from their homes. To meet up with work and other engagements they may decide to trek early in the day or late in the night and end up waylaid by thieves in unsafe areas. Will they not be worse off in the final analysis? It would have made more sense if the governors, Edo state in particular, rehabilitated all roads in interior locations to ameliorate the hardship of residents before the ban.

The state governors will do well to tell Nigerians how many jobs they've created in their states since they assumed office. You'll discover in most states it is nowhere close to those put out of work by the ban on bike riders. Where do they expect them to get new jobs? To add salt to injury, Governor Oshiomhole has made it clear he is not interested in tricycles, popular known as keke NAPEP, stating his preference for taxis. Where he expects them to get funding for cars is unknown.

But it is pathetic that at a time the nation is grappling with security challenges, exacerbated by unemployment, state governors have chosen to swell, with such gusto, the teeming population of jobless Nigerians, leaving them exposed to terrorism, kidnapping, oil bunkering, robbery and other social vices that has eluded government 'ban' for many years.

On the contrary, it is corruption, dereliction and negligence of duty that needs an urgent clampdown! We need better roads. There must be concerted effort and synergy from the relevant law enforcement agents to reduce accidents on roads and protect lives and properties.