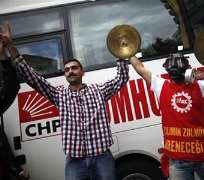 Turkey's deputy prime minister said on Monday the armed forces could be called up if needed to help quell popular protests that have swept Turkish cities in the last two weeks, the first time the possibility of a military role has been raised.

Bulent Arinc made the remarks in Ankara, where 1,000 striking trade union workers faced off briefly against police backed by several water cannon, before police retreated and the crowd dispersed.

In Istanbul, the cradle of protests that have presented Prime Minister Tayyip Erdogan with the greatest public challenge to his 10-year leadership, several hundred union members also marched in sympathy with the anti-government protests.

Police prevented them entering Taksim Square, the focus of the unrest, which flared up again at the weekend with some of the fiercest clashes so far when police fired teargas and water cannon to clear thousands of people, some of them throwing stones, from the square.

Any use of the army would be a dramatic step in Turkey, where Erdogan has pushed through democratic reforms including taming a military that toppled four governments in four decades.

Monday's marches were peaceful but small compared with many of the recent protests, and, while it was unclear how many of the 850,000 or so public workers answered their unions' call to strike on Monday, there were no signs of major disruption.

Police detained 441 people in connection with the clashes in Istanbul on Sunday and 56 in the capital Ankara. As violence across several cities entered its 18th day, at least four people have been killed and around 5,000 injured, according to the Turkish Medical Association.

What began as a small demonstration by environmentalists upset at government plans to build on a public park adjoining Taksim has grown into a movement against Erdogan, who opponents say is overbearing and meddles too much in their personal lives.

"TIRED OF INTERFERENCE"
"We are tired of protesting, we don't want to keep doing this, we want to return to our lives - but we are tired of this oppressive government constantly interfering," said Mahmet Cam, a teacher among the striking workers in Ankara.

There were also clashes on Monday in the city of Eskisehir, around 200 km southeast of Istanbul, where police used teargas and water cannon to disperse crowds and cleared away hundreds of tents, the Dogan news agency reported.

European Union enlargement commissioner Stefan Fuele expressed concern about developments in Turkey, whose negotiations to join the bloc have stalled, partly over worries about its record on human rights and freedom of speech.

"Turkey needs de-escalation and dialogue, not continuation of excessive use of force against peaceful protesters. We watch with concerns," he tweeted.

Germany has long harbored doubts about admitting Turkey to the EU. Chancellor Angela Merkel said she was "appalled, like many others" at Turkey's tough response to the protests.

"I would like to see those who ... have a different opinion and a different idea of society having some space in a Turkey that moves into the 21st century," she told the German broadcaster RTL.

"What's happening in Turkey at the moment is not in line with our idea of the freedom to demonstrate or freedom of speech."

Erdogan sought to seize the initiative over the weekend by holding huge rallies in Istanbul and Ankara. Hundreds of thousands turned up to support a leader who has won three successive elections, and whom they considered unfairly under siege.

The blunt-talking 59-year-old said the rallies were to kick off campaigning for local elections next year and not related to the unrest, but they were widely seen as a show of strength.

A defiant Erdogan told a sea of flag-waving supporters in Istanbul on Sunday that the unrest had been manipulated by "terrorists" and dismissed suggestions that he was behaving like a dictator, a constant refrain from protesters on the streets.

Just a few kilometers away, police fought running battles with protesters in clashes that lasted well into the evening.

The stark contrast between events in different parts of Istanbul highlighted how the protests have polarized Turkey, its conservative religious heartland largely backing Erdogan while Western-facing liberals swell the ranks of the protesters.