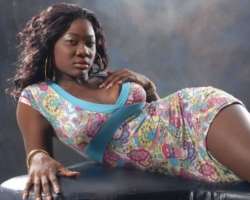 In her short but exceedingly exciting career so far in Nollywood, sexy and 'hippilicious' actress Mercy Johnson has been a lightning rod for controversy. it was as if her success, created an avalanche of hate, disdain, envy and a passion in the tabloid media to celebrate all that define her acting career and personal life in the most sordid and unenviable light. Every imaginable shenanigans - the crazy, the jaw dropping and the totally outrageous have been ascribed to her. You google her name, and you would be confronted with all manner of unsavory stories, most of them with backgrounds in innuendoes, conjectures and others dripping in hate, sarcasm and outright lies. She has among others, been accused of causing the breakup of the marriage of a prominent Nollywood director.

The gist is that she forced the young director abandon his family and children, While he cavorted with her. When the director was no longer seen to be useful to her over all game plan. She dropped him like a hot potato and left the man reeling - an act some in the industry allege contributed to the creative demise of the promising director. She has been accused of dating married men, and using her physical assets to hoodwink, control and even bewitched the men - a situation that has created a steady stream of hatred and disdain from the women whose husbands found in her a more comfortable emotional abode.

Sometime last year, a tabloid media reported that she was accused of having stolen money from one of her lovers and the news was a big Internet sensation. She was said to have been deceived by a married man in Spain, made to believe that he was single, only to realize after telling friends how excited she was to have found the love of her life, that knight in shining armour was happily married, and had just been blessed with a baby. She was said to have been devasted beyond words and almost committed suicide. She has been accused of being a man eater whose sexual appetite and material cravings have seen her provide sexual favors for men in order to keep up with her high-end and high-maintenance lifestyle. Everything that is unsavory has been associate with this young and sexy actress. As an industry insider and one who knows the intrigues and the cutthroat competition that exists in the industry, I have always regarded the stories ascribed to Mercy Johnson with the pinch of salt. I have refused to pass judgement on her personal life, and had been waiting for an opportunity for me to confront her one on one with these mountains of accusations and have her respond to them. It did not help her cause in the sense that she has studiously kept her silence and refused to engage the media in the back and forth reports on her personal life, which in a way was good, because what you are about to read here, would not have been exclusive.

Last year during my trip to Nigeria, I asked her to meet me at my hotel, and She had apologised that she was shooting a movie and would be on set for another five days. Since I had two extra days to stay in Lagos, I told her I would call her when I got back to the States. She had promised to break her silence and tell me everything I and millions of her fans needed to know concerning her personal life. Earlier this month, I called Mercy in Lagos, and for over two hours on the phone, I listened to a sweet, young and talented actress who was seriously in pains due to the mischaracterization of her person, her values and the ethos that define her soul. I listened to a talent who, even though Nollywood has been kind to her, and has rewarded her with success, acclaim and material growth, has thought of packing it up, and calling it quits because she just can't take the personal attacks and lies on her person any longer. I listened to an actress, who tearfully told me "people are just out to destroy me, for reasons I can't adduce." Mercy was frank, and answered my questions candidly because she said "I finally want my fans to know who the real Mercy Johnson is, as opposed to the one that has been painted in the media which I do not even recognize because that is not who I am" I asked Mercy to tell me the truth about all that has been written about her and below, in her own word, I present to you Mercy Johnson taking on all that have been written about her.

On Her Break-up of a Directors marriage
"I read that story and nothing could be further from the truth. I did not break up any director's arriage, because I did not date any director. I was shocked when the story was published and I wonder aloud where they got the story. That story hurt me a great deal because at that time, I was in a relationship with someone that I really loved and cared for. He left me after that story was published because he thought that I was two timing him, which was patently false. All my explanations to him did not move him and I was devastated. No such thing happened. As an actress have I been close to my directors? The answer is yes - like all other actresses I have had close ad professional relationships with my directors, but that is where it all end - nothing personal.

People just take delight in writing stories that would embarras me. I may be at home, on my bed, watching television as it happened recently, and a journalist would call me to say they just saw me leaving a hotel with Mr. X. When I told that journalist I was on my bed and that he should do his investigations properly, he hung up. A lot of what that has been written about me is not true. can you imagine how wicked people can be by writing that my mother is a witch and that it's that power she transferred to me to have all the men they claimed have been doing my biddings? That was a low blow. We are Christians and abhor anything diabolic, and for anyone to write such a lie shocked me to my foundations. It wore me down, and as human, I couldn't help but shed tears at the blatant destructuve campaign my haters have mounted against me. All I can say is that I leave them to god to judge."

On The Story that she stole money from her lover

"Can you believe that someone in his right mind would write such a story even though they knew it was false? The newspaper that wrote that story later retracted it, but the damage was already done. The truth is I didnt steal money from a loved one. Logically, it is incongrous for one to even imagine it. If I am dating someone, and I have a particular need, and I have a particular need, wouldn't it be better for me to ask that individual to give me help as opposed to taking his money without his consent? That is just not who I am! But again, it is the cross that I have borne for the past five years - a cross that is getting too heacy to bear these days. Truth is, I have thought of quitting many times. It is just too much for me. You do not get appreciated for the happiness you bring to people, all you see in the media is one hurtful and blatantly false story about you. But I love acting, and I thank God that I have been accepted and loved by my fans - they are the reason why I am still here-otherwise I would have long thrown in the towel."

On her reported uncontrollable sex drive

Again, that is a blatant lie. I am not different from any other young woman who got thrust into limelight at a very early age. Have I made some mistakes with men? You bet I have. But tell me whi is that young woman or even grown woman who has not made mistakes with men? It is true that I have had my heart broken many times, I just told you about the guy that ended a relationship with me after reading that I was seeing a married man, which was not true. It is also true that I was in a relationship with a guy in Spain who told me he was not married, only for me to realize after travelling to Spain to meet him that he was married, and was just playing games with me. You learn from certain experience and they help make you stronger and better person. But does this mean that I'm a young woman with uncontrollable sexual drive and cravings? No, absolutely not! I am from a good and decent home, and there are certain values that are sacrosanct with me. I have not and do not hop from one bed to the other, not for pleasure or material comforts. Nollywood has been kind to me. I get paid decent fees, and I am always in demand thank God for that, so I make decent income that guarantees me a decent and comfortable lifestyle. Why should I demean my self worth and value by sleeping with men for money? That is totally out of my calues system. Do you know how many times I have cried when I read things that are ascribed to me that are totally false? The media made last year (2009) my worst year ever. In terms of the volume of lies and hate-filled stories they published about me."

On her rumored wedding plans

"Yes. It is true. I have finally found the mand of my dreams - the one I have been looking for - one who understands me and I dare say this is the best relationship I have ever had. Let me confess this to you: We are engaged and would be married soon. His name is Prince Odi and he is a prince from Edo State. He is a great man - a God-fearing man, a lover, a confidant, an enabler - just everything a woman desire in a man and I count myself lucky to have finally found him. He is a successful businessman. He cuts the picture of who and what manner of a man I was praying for, and my meeting him proves that prayer works and if you desire for a soul mate that affirms your values, God will bring him to you at the appointed time. He is a man who has accepted me for who I am and pays no attention to all the nonsense that has been written about me. He regards them as 'occupational hazards'."

Mercy Johnson described herself as a girl-next door that has been eminently blessed by God. "I forgive my enemies for all the heartache and emotional stress they have brought me all these years"