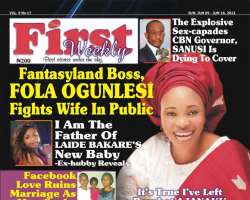 The smooth relationship that earlier existed between popular and successful gospel singer, Tope Alabi, and her acclaimed spiritual father, Prophet Ireti Ajanaku seems to have now become a thing of the past.

The latest development is that the father-and-daughter relationship between the duo has gone sour and the man of God has reportedly replaced the top singer with an up and coming gospel artiste named Ifemide.

First Weekly learnt that Prophet Ajanaku has chosen Ifemide to be his new daughter thereby kicking Tope Alabi out of his list of spiritual children. Ifemide is now said to be the apple of the eyes of the acclaimed prophet.

When contacted on the matter, Tope Alabi, who spoke through her husband, Soji, declined to talk about the issue. He said, “on that issue, all I can say is that God is in control.”

When asked if Tope Alabi still attends the church, he sharply said, “we have stopped going to the church.”

Information gathered from those who claimed to be in the know of the happenings between the two was that issues bordering on alleged infidelity caused the strain in the relationship between Tope Alabi and Prophet Ajanaku.

We gathered further that Prophet Ajanaku had told the artiste to desist from certain behaviours, but that she did not listen to the man of God. We also scooped from various sources that when Tope became adamant, the pastor told her to go her separate ways and stop seeing him as her spiritual father, which was why he went ahead to anoint another singer to take over from the popular gospel artiste.

Tope has not hidden the fact that the man of God is the brain behind her phenomena success in the music industry. In most of her tracks, she sings the praises of Prophet Ireti Ajanaku. It was common for her to always sing 'the God of Ajanaku' in most of her songs.

Informants squealed to First Weekly that Tope decided to accept the development as a reality, when all entreaties she made to the prophet to listen to her defense failed.
Efforts by First Weekly to speak with Prophet Ajanaku on the issue were futile as he neither picked our phone calls nor replied our text messages to his phone as at press time.