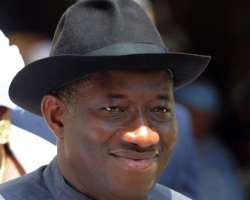 
Leadership involves going against the grain and norm to do what is best for the common good of society which has the potential to impact broad segments of people. A glance around the African Union/conference reveals a bunch of clinically challenged rulers who are self-centered, grandiose, and narcissistic men and women like some of their subjects. When most of our rulers are presented with the opportunities to arise and shine  by using their powers they often succumb and/or differ to personal and narrow interests that exposes them as incapable of true and tested leadership. There were two conspicuous examples for Mr. Goodluck Jonathan to establish his positive Bona fides in power back in 2011. The first one was when some Nigerians who voted and the graduated university youth service corpers who invigilated the elections were murdered in cold blood and displaced with impunity.

Instead of using that opportunity to begin the process of writing his name in the golden annals of Nigerian and African history by bringing the culprits to justice, President Jonathan consider his own interest and those of his benefactors and quickly pushed the issue under the rug. There has never been an efficient and conclusive investigation to identify the victims and survivals of the April 2011 presidential election violence spree. Where is the comprehensive list of the names of the dead? When and how have we commemorated them? How many people were prosecuted for those crimes? The refusal of the government to address this issue head-on has instead emboldened the culprits of those mass murders and enabled them with time to thrive in their planning and execution of more carnage which they have sadly done over and over again.

However, the second missed opportunity was when the former speaker of the Nigerian national assembly Mr. Dimeji Bankole was indicted by the Economic and Financial Crime Commission (EFCC) in June 2011 for the theft of over $1 billion. Mr. Bankole was used as a fig leaf to convince us that Jonathan and his administration might be able to fight corruption, unaccountability, and impunity but that would prove abortive in the last 2years. Mr. Bankole was allowed to walk off to retirement by the corrupt shenanigans of the 'minister of injustice' and the Nigerian courts. Hence this was a grave signal to the members of the new regime, supporters, and critics alike that (nothing don change and our Naija Ogas dem dey camp pe) corruption is alive and well.

Some ardent GEJ supporters would insist that his hands were tired during the crucial months after his election with regards to responding to those that sanctioned the post-election mayhem such as former Head of State General Buhari, former Vice-President Atiku Abubakar, former Minister of Finance and Governor of the Central Bank of Nigeria Alhaji Adamu Ciroma, and Professor Ango Abudullahi.  Their excuses include the explanations that he needed more time to clean up the military which was infected with Boko Haram sympathizers and recuse it from the authority of Boko Haram sponsors. Sources report that if these fine tuning were not done there would have been a quick coup in Nigeria. This logic is also linked to how Mr. Dimeji Bankole the former speaker got away with over $1 billion in a nation where people earn less than $2 per day; inhabitants die of malnutrition and poor healthcare.

According to the Jonathan camp since Mr. Bankole was part of the President Olusegun Obasanjo wing in the People Democratic Party (PDP), the regime did not want to expose the gross corruption of the former president and his boys because they needed the support of General Obasanjo against the northern political and military insurgency. In the attempts of President GEJ to nip problems in the bud a minimalist doctrine was established that has foreshadowed the administration ever since. As a cause and effect scenario the chop I chop corruption doctrine is witnessing a bountiful remix and the insecurity debacle in northern Nigeria has morphed into a flagging western African terrorist war. The management of the country is surrounded by folks that seem not to be looking 50years ahead instead they are preoccupied with their daily loot.

Those fellows that the progressive communities in the Diaspora and in Nigeria have called for their removal from power are still part of the government. The government reports that Governor Rotimi Amaechi has stolen billions from the coffers of the Rivers state, but why did his challenge to the presidency necessitate these revelations. Many of us know how Mr. Amaechi destroyed and seized peoples' properties in Port-Harcourt with some victims dying of heart problems and stroke. His thugs were allowed to intimidate the riverine state with the knowledge of the federal government. What messages are we sending that it is okay to steal as much as you want and be inept in elected and appointed positions except when you challenge Abuja?

How it is that the former Vice-President of the World Bank and our current Minister of Finance Ngozi Okonjo-Iweala, the Central Bank, and the EFCC do not have a transparent allocation system of resources up till now? We were promised transparency but all we witness is bolder and broader impunity in the nation to mismanage and plunder. Ironically the other parties such as Action Congress of Nigeria (ACN) and Congress for Progressive Change (CPC) have not provided legitimate examples of better stewardship in neither Abuja nor the state mansions they control. For example, they have not attempted to cooperate in reducing and/or exposing government expenditures on government officials. They are not particularly interested in fixing the loopholes but are out to amass all the wealth that they can at the expense of the people.