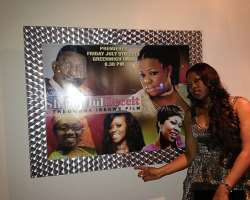 Tima as she is known amongst her colleagues came to the premiere looking hot and sexy to celebrate her nomination as African Favourite Actress at the African Oscar in the USA and to promote two of her films coming out this year.

She said 2013 is looking good for her as she looks forward to the release of Shameful Deceit a Theodora Ibekwe Film on the 5th July,2013 and the release of her own film Battered on the 28th Sept,2013 at the Odeon Cinema in Greenwich, London.

Fatima told the waiting press that she has been nominated amongst African elite actresses like Genevieve Nnaji, Omotola Jalade Ekeinde, Nadia Buhari, Mercy Johnson and many more . It is an honour and i am grateful for all the support i am getting from everyone.

She said her sense of dress reflects her mood for the day and she enjoys living a peaceful and happy life.

Watch out for Shameful Deceit and Battered coming soon