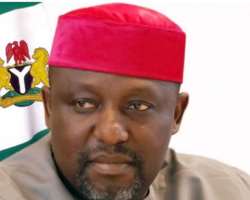 I read a recent publication from Thisday Newspaper of 6th June 2013 where the Imo State Deputy Governor Prince Eze Madumere, among other things, was quoted to have stated in a press briefing he granted in Abuja recently that his boss, Governor Rochas Okorocha would not vie for governorship seat again in Imo State come the year 2015 but would contest for the post of president of Nigeria.

According to the story, Prince Madumere also said that the merging political parties (APC) had the capacity to win the 2015 general election. The Deputy Governor's optimism was that the North-West and South West constituted what he called 'electoral college' of Nigeria.

'What constitute the electoral college of this nation are the North-West and South-West. But if you look at the Electoral College in the North, they brought the ANPP and the CPC. Whether you like it or not, the CPC will stay. When you go to the West, we have the ACN'.

Firstly, before I look into Governor Okorocha and his proposed presidential ambition, I wish to tell the Imo Deputy Governor that the use of the word 'electoral college' in the circumstance he used it in the above publication was wrong. An electoral college is a body of electors chosen or appointed by a larger group to cast votes in an election. Such is not the case in general elections in Nigeria which the Deputy Governor was referring to.

Secondly, saying that it is the North-West and South-West that that determine who governs the country is a stalk misconception.

Nigeria is made up of six (6) Geopolitical Zones namely; the North-East, North-Central, North-West, South-West, South-East and South-South. Nigeria is made up of 36 states and the Federal Capital Territory in Abuja. North-West and South-West have 14 states while the other zones put together are made up of 22 states plus Abuja. If so, it is then a great miscalculation for somebody to wish away the political strength of the other four Geopolitical Zones in the country considering the population of the electorates that come from them.

Now to the main menu.
During the last governorship election in Imo State, many Imo voters were hoodwinked by the philanthropic gestures of Owelle Rochas Okorocha. The Jos-born populist took advantage of this popularity and unleashed unusual political gimmicks which the Imo voters never witnessed before. Some of the exhibitions were buying and eating of akara in the streets; riding on keke bike; walking in the street, lifting a baby for showmanship; inviting a hawker to buy gala and chewing same to the admiration and clapping of hands by the easily deceivable voters.

Interestingly, it is a fact that Governor Okorocha before winning the Governorship seat in Imo State lost almost all the elections in contested in his life. However, there were a lot of factors that gave him victory in 2011. Some of them were the support from the political structures of the Late Odimegwu Ojukwu, Agbasos, APGA, Chris Anyanwu, Emeka Offor, Achike Udenwa and the 'strategic' one from President Goodluck Jonathan who were all deceived into thinking that Okorocha was a messiah.

Regrettably, today, Okorocha is at war with all the above and other factors that helped him in the 2011 Governorship Election in Imo State.

Be that as it may, the manner Governor Okorocha has been piloting the affairs of Imo State is going to be a factor that will affect his acclaimed presidential ambition come the year in 2015.

For now, the Governor seems to be using what he claims he have achieved in Imo State to package himself for the said presidential race. This packaging seems to be working well on the psyche of many gullible-minded and unsuspecting persons.

However, it is a fact that the man Rochas Okorocha is a very 'intelligent' man. He always thinks ahead of time. But unfortunately, his so called intelligence is mostly applied in the negative for selfish gains and for undue exploitation. He is good at hoodwinking people into not seeing his real intentions. He claims to like the people but in reality he is a sadist. He is a celebrated liar that easily makes promises but can never keep any promise made or agreement entered into. Here is an orator people like but takes advantage of this likeness to commit treachery on the society.

His governance in Imo State is a big scam. He has destroyed almost all the governmental institutions in the state. Furthermore, he does not follow due process and the law in conducting government business and he publicly brags over it. There is no contract in Imo that has a known value and work design. Some do not even have any known contractor but are done directly from the governor's relations and cronies. 95% of the contracts in the state do not follow due process. This the Governor has done so that corruption, accountability and transparency will be difficult to access. All these have also exposed many contractors as many contracts done are not paid for.

On Rule of Law, the governor dissolved all the statutory commissions, governmental institutions and elected local government councils before the expiration of their tenures. He sacks civil servants without following the law and at the end would ask any aggrieved party to go to court. He will also come to the court and deny that he never sacked anybody and would disobey court judgments when they do not favour him. The case in hand is the disobedience to an Imo State High Court judgement ordering the re-instatement of the sacked Imo State Judicial Service Commission and the re-instatement of the sacked local government councils.

Okorocha is a man who has great penchant for anarchy and is ready to unleash hoodlums against anybody. Can such a man rule an educated, enlightened and sophisticated nation like Nigeria as its president? This is a man who has no programme for human development and uses sub-standard infrastructure which must be built on major roads in cities to deceive the public.

Just to gain cheap accolade, this is a man who instead of doing an on-going flyover that will decongest the city of Owerri prefers building roundabouts of lesser value for showmanship which will eventually cause more traffic jam. This is a man who connived with a Lebanese to dupe Imoe of =N=458 million and still used the same saga to unjustly impeach his deputy.

This is a man who says that he has cut down his security vote but in reality is secretly collecting more than what his predecessor collected. This is a man who told the world that he was not collecting salary as a Governor but later collected the arrears of the same salary and paid into his wife's foundation as donation.

Roads, yes, so many roads have been initiated but how many have been completed? Education, yes , free education in tertiary institutions but it is a Greek gift, giving the people segmented free tuition yet asking the University authority to heighten acceptance fee and other sundry fees which tantamount to robbing Paul to pay Peter. Primary education, only many feels that the current administration is giving the primary school children in the state free education. The truth is that free education has been on in this country for Primary Pupils since 1999 hence the creation of State Basic Universal Basic Education Boards to oversee the implementation of the free education at both Primary and Junior Secondary School. This is solely being financed by the Federal Government. But people have been led to believe that the current Imo government is giving free education from primary to tertiary level. What a deceit!

Perhaps, according to Okorocha's understanding, standing before NTA, AIT and Channels television cameramen to distribute one hundred naira occasionally to pupils is his own understanding of free education.

Okorocha says that he will beat Mbakwe's records. Mbakwe built visible industries such as Golden Guinea, Avutu Poultry Farm, Ceramics Industry, Aba Glass Industry, Concorde Hotel, Resin Paint Industry, Amaraku Power Station etc. These establishments employed several Imo sons and daughters for economic and social satisfaction. Can Okorocha's regime mention one, I mean one industry he has proposed let alone starting? On the contrary, what he did was to sell what remains in the state like the Concorde Hotel, Imo Transport Company, Legislative Quarters, ADAPALM etc to his cronies and sacked more than ten thousand graduates employed in the state public service with a fake promise that he was only reviewing their employment process.

Governor Okorocha has taken Imo back to pre-1999 era but many find it difficult to know. Many will not be allowed to know how far this self-confessed anarchist has destroyed his state until he goes out.

I pity the likes of the Minister for information Mr. Labaran Maku, Jude Agbaso, Martin Agbaso, Chris Anyanwu, Nwankwo Kanu, Prof Fabian Osuji, P.C. Onuoha etc. the Community Speakers, Government Liaison Officers, traditional rulers other community government officials who played into the hands of this game-master. It is on record that whoever identifies with Governor Okorocha's Government will end up frustrated, exploited and left without value. Today, I know that Maku, Chris Anyanwu, the Agbasos, Emeka offor, Capital oil, Udenwa et al will ever regret having anything to do with Governor Okorocha in their lives.

My only gain if Governor Okorocha wins the 2015 Presidential Election will be that he is a fellow Imo man. But his ruling this country as a president will be the highest mistake any human being can make. He will sack all the governors like he did to elected local government officers in Imo State and destroy all the governmental institutions put in place in the country. God forbid!

I know that in 2015, Nigerians will not be hoodwinked like many Imo People were in 2011 by this sugar-coated mouth scavenger to allow him rule this country. Also the people who make up the merger party are more educated, sophisticated, enlightened, sensitive and informed that they cannot make a lawless man like Rochas a running mate to anybody not to talk of making him a presidential candidate.

It is our prayer that this presidential ambition will be a reality so that Imo will be quickly recovered from this sole-trader who came to rescue the state but ended up rescuing his pocket and his bankruptcy.