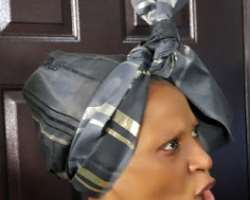 Actress, Ngozi Nwosu, who thankfully has been responding to treatment and actually getting better after she was diagnosed with a kidney and heart related ailment has explained how it all started.

And according to her, her ailment began with the treatment of pile several months back and she had always known she wasn't going to die because she had faith in God.

“I haven't been working for 2years. All this problem started with pile, so for almost a year, I couldn't do anything. I was battling with just pile until finally I had an operation and just when I was getting myself back, I did one or two jobs before the kidney thing started.

Basically nothing runs through the mind of a sick person than you know you will find health one day. I knew I would not die because really there was a time I felt well, it's over but at one point in time, I just knew that God loves me and I take each day as I see it and so here I am. Everything has to do with faith.

“I'm going back to the UK because I'm not through with my treatment yet, I'm still getting my treatment. Even if I've been having the urge to work, I can't deceive myself because I know I can't work now, I have to be fit before I can work….” she rounded off.

The Good The Bad And The Ugly Life Of Ngozi Nwosu