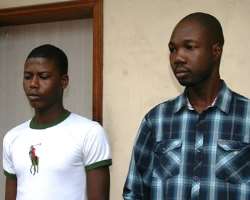 The two defendants pleaded not guilty to all the charges when they were read to them.

Count one of the charge reads: “That you, Agbaje Abdulfatai Bamidele and Adepoju Moshood on or about the 23rd March, 2013 at Ibadan within the Jurisdiction of this Honourable Court knowingly conspired to forge Three Hundred and Forty Two (342) pieces of One Hundred ($100) United States Dollars bills and thereby committed an offence contrary to Section 6(2) and punishable under section 5(1) of the Counterfeit Currency ( Special Provision) Act, Cap C35, Laws of the Federation of Nigeria, 2004”.

Based on the pleas of the defendants, prosecuting counsel, Ben Ubi prayed the court to fix a date for trial and remand the accused persons in prison custody.

Justice Adejumo adjourned the case to September 24, 2013 and ordered that the defendants be remanded in Agodi Prison.

Troubles began for Bamidele and Moshood on March 23, 2013, when one bureau de change operator, Aminu Salisu alerted the Police in Ibadan that Moshood was attempting to change into naira notes five pieces of One Hundred dollar notes which he suspected to be fake. Bamidele was later arrested after Moshood confessed his involvement.

Bamidele, in his statement, claimed he became a foreign exchange (forex) trader in Lagos after he was laid off by United Bank for Africa (UBA) in 2011. A house search carried out at the residences of both Moshood and Bamidele yielded the recovery of suspected fake $23,700 (Twenty Three Thousand, Seven Hundred dollars) in One Hundred dollar ($100) denomination and another fake $10,000 (Ten Thousand dollars) in One Hundred Dollar denomination.