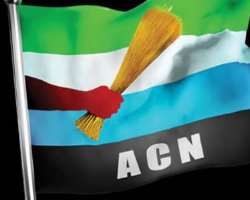 The war of words between the federal government-led Peoples Democratic Party, PDP, and the Lagos State Action Congress of Nigeria continued, Wednesday, with the former accusing the latter of 'plunging the state into unprecedented sorrows, deprivation and Fascism.'

In a statement signed by Taofik Gani, Publicity Secretary, Lagos State PDP, the party said that the ACN-led Lagos State government declined to be a part of the Good Governance Tour, organised by Labaran Maku, the Information Minister, because it cannot 'showcase any tangible development' in the state since 1999.

Joe Igbokwe, the Lagos ACN Publicity Secretary had, in a statement on Tuesday, described Mr. Maku as an 'indolent, incompetent bootlicker' fed fat by the 52 per cent monthly allocation to the federal government.

'We know that Maku is merely vending sour grapes because Lagos State government saw through his folly of
organising programmed revelry in the name of Good Governance Tour when he had done nothing to uplift his ministry in the years he had been the Minister of Information,' Mr. Igbokwe had said.

In its reaction, the Lagos PDP accused Babatunde Fashola, the governor, of making a 'U turn' on the Good Governance Tour after he had supported the 'noble idea' at a meeting of state governors.

'The idea of the Good Governance Tour is to showcase dividends of democracy in each state, especially as delivered by the Federal and State Governments,' the PDP statement said.

The Lagos PDP claimed it has been vindicated that the ACN government in the state is 'damn arrogant, non tolerant and hostile to even constructive criticism.'

'The party wonders whether the unguarded statements against the person of the (Honourable) Minister of Information was in fact the appropriate reaction in the circumstance or for the State Government to showcase the much touted developments in the State,' it added.

Mr. Maku had, at a 2013 ministerial platform on Monday, said that Lagos State had benefited so much from the federal government that the state governor 'has nothing significant to do in his state than mostly environmental and traffic maintenance.'

The Information Minister's comments provoked heated reactions from the opposition with both the state government and the ACN issuing tersely worded statements less than 24 hours later berating Mr. Maku.

While the Lagos State's rebuttal focused largely on infrastructural development in the state, the party produced a scathing criticism of the Information Minister.

In its statement, the Lagos PDP said that using abusive languages and telling lies have become the stock in trade of Mr. Igbokwe and the ACN.

'It is always characteristic of the ACN leadership in the state to deny the obvious. It is true that Lagos State enjoys monumental federal government presence and support.

'Amongst many contributions of the federal Government is the Lekki-Ikoyi link bridge recently commissioned.
'It would be remembered that Governor Fashola attributed the successful construction of the bridge to the federal government under late president Musa Yaradua,' the PDP statement said.

'One is thus bemused that whilst the Governor cannot deny the great supports of the federal Government to Lagos State, the Lagos State ACN spokesman would always go on a frolic of his own and showcase the attitude of a man suffering from diarrhoea of the mouth.

'Indeed the huge lagos 'tax payers money monthly allocated to the lagos ACN spokesman could make him get over fed like a kid and thus become exuberant in character,' it added.

The Lagos PDP also said that notwithstanding Lagos State's more than N30 billion internally generated revenues as well as N9 billion monthly federal government allocations; it is still the biggest debtor in the country having collected local and foreign loans of well over N6 trillion.

'Notwithstanding the huge sums, the major projects in the state are carried out by concessionaires. Such projects include the lightrail, lekki-epe road…

'For fourteen years the ACN-led government in the state cannot construct the very expedient fourth mainland bridge, even though it had been their point for campaigns at every election.

'Indeed, all the bridges in the State connecting the Mainland and the Island are federal Government legacies,' the PDP said.