ONE YEAR AFTER DANA CRASH:I made ‘Last Flight to Abuja’ to expose the secretive aviation industry---Obi Emelonye 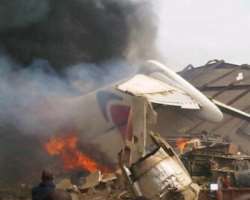 Exactly one year after the ill-fated plane crash in Lagos, that took the lives of over 150 passengers, filmmaker Obi Emelonye, restates the relationship between his film, LAST FLIGHT TO ABUJA and Nigeria's aviation sector.
Excerpts:

Your new film talks about air safety, identifying that crashes are due to human error, technical difficulties and luck. Explain the luck vis a vis your faith?

In accidents, especially those concerning aviation, you will always find elements of human error or misjudgment, technical failure and or sheer bad luck. The catalytic effect of these factors will vary in different accidents, sometimes in isolation and at other times as a combination of factors. In telling the story in LAST FLIGHT TO ABUJA, I made a conscious decision to engage all of these factors in the causation of the mishap. In a place like Nigeria, the expectation is that human error and technical failure are the likely cause of crashes. But the element of luck cannot be discounted. Why was it that the plane was just returning to fleet after a service? Why was it that the pilots swapped shifts? Why did a particular passenger board that plane or even miss it for that matter? These are questions we cannot answer with rhyme or reason. And in things like these, Nigerians would revert to faith. This is so because we believe that God controls all the things that are beyond our control. I am a spiritual person and believe there are a trillion aspects of our lives that we are completely helpless about and it is up to God to look after them for us. So when things that are unsavoury happen, it is not really bad luck but the way God ordained them to be.

Have you had any near-experience with crashes to be able to write and direct these scenes so well?

Most flights in Nigeria are tasking on the heart, to say the least. I think ignorance makes it even more stressful which was why I attempted to tell this story to lift the lid on the secretive aviation industry so that people can have knowledge which would ultimately set them free. For example, when we were returning from Bayelsa where we attended AMAA 2013, the flight got turbulent and I saw people saying their last prayers. But I knew that the most dangerous times on a plane are during take-off and landing and since we were at cruising altitude, I did not worry. But it was interesting watching the panic around me. Observing that kind of scenario each time I fly provided the research for directing LAST FLIGHT TO ABUJA to capture the blind panic that our people can be capable of.

What basic message will you say Last Flight to Abuja will leave the audience and the aviation authorities in Nigeria?

First and foremost, I wanted to make a film about a subject matter that I have been very passionate about. I never wanted to make an issue-based film. But when the crash of June 3, 2012 happened only five days to our London premiere, I became involved. And although I never planned it, the message of the film became that of hope...hope that with right planning and quality training in the aviation sector, accidents can be avoided. But when they do happen (as they happen anywhere else in the world), these same qualities would make sure that the loss of human lives and property is brought to a minimum. After watching the film, I want people to leave with a sense of optimism that not all plane accidents end up in disaster. Travel by air is the safest mode of travel, in Nigeria and everywhere in the world.

Aside aviation safety what other anomalies in your country bother you most?

I am not a politician and while I feel a social responsibility as a filmmaker to comment on my society, I would reserve the medium of my films to make that commentary. So, look deeper in my next projects to see me put up a mirror to our society. But for me to stand and soapbox about social ills, that is not my place.

The title Last Flight to Abuja, does it have any semblance with the reality that Last Flights to any destination are the most fatal?
The title of a project, like my late lecturer Esiaba Irobi said, should be like a mini skirt; short enough to be interesting but long enough to cover the subject matter. When I chose the title for the film, I wanted one that was provocative and concise; one that would give a broad insight into the narrative without giving it away. We have not been great 'titlers' in Nollywood and it great to see that change over the years.

What is the impression of the aviation authorities on your interpretation of plane crashes in Nigeria? Were they helpful in the project?

I got a lot of assistance from the aviation industry. I shot airside at the old Lagos airport for ten days. I shot in the terminal building of MM2 for two nights. At the time of shooting the film in November 2011, Nigeria had enjoyed a few years of relative air safety and my project did not evoke the kind of nervousness that it would trigger post 3rd June 2012. Honestly, apart from an air traffic controller who confronted me after seeing the film in the cinemas, the aviation industry has been almost indifferent to the film. Maybe, they do not go to the cinemas but I guess now that it is available on DVD, we would get to know what they really think.

Achieving the special effects associated with plane crashes can appear like an unrealizable dream from the Nigerian standpoint. What challenges did you anticipate at the onset and how did you surmount them?

After the success of THE MIRROR BOY, with all its commercial success and critical acclaim, my 'creative brinkmanship' style was vindicated. Emboldened by that, I set my sights on a more technically tasking project. I knew the challenges would be immense. To tell the story with the kind of visual realism necessary, we had to use a mixture of real life footage, computer generated imagery, 3D animation and visual effects. My team made up mainly young Nigeria animators worked on the post production of LAST FLIGHT TO ABUJA for 5 months and what we got was a level of technical achievement that belies our micro budget. I guess in today's digital democracy, if you can dream it; then you can achieve it. This film really underlines that fact and I am happy that it has empowered a lot of young filmmakers to try and tell stories that they would have been too scared to touch. That is my biggest joy.

What is the total cost of this film?

I don't talk money. I am a creative person but let me just say that Last Flight to Abuja cost a bit more that the average Nollywood film but for what we achieved internationally and the look and feel of the film, our budget represents a snipe.

Nigerians filmmakers are fond of breaking films into several parts. Why did you tell this story in one part?

We have to grow and we are growing. Our audience have been voting with their feet and speaking out loud against these practices and we have been listening. I chose an ensemble star cast to make a statement that I feel has catapulted my humble project into being a darling of major international festivals; multiple award winning film and the highest grossing indigenous movie in West Africa in 2012. If we can translate these successes to the DVD release on the 20th of May, then my happiness would be complete and I would give God the glory.