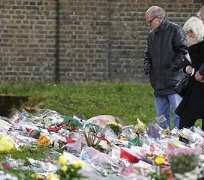 One of two men charged with murdering a British soldier on a busy London street appeared in court for the first time on Monday, blowing kisses to a supporter in the public gallery and clutching what appeared to be a Koran.

Michael Adebolajo, 28, was remanded in custody until a hearing within the next 48 hours to decide whether he can be released on bail.

Adebolajo, who was shot by police along with another man at the scene of the killing of Drummer Lee Rigby, appeared at Westminster Magistrates Court with his left arm wrapped in bandages.

Flanked by three guards behind glass panels in the dock, Adebolajo asked to be identified by a different name, Mujahid Abu Hamza. His defense lawyer David Gottlieb and Deputy chief magistrate Emma Arbuthnot referred to him as Abu Hamza during the hearing.

Adebolajo repeatedly interrupted proceedings, asking why he had to stand up and questioning the charges after they were read to him.

"May I respond, may I respond," he asked several times during the five-minute hearing. He did not enter a plea and the magistrate said a further hearing will take place at the Central Criminal Court, known as the Old Bailey, on June 28.

'ALLEVIATE THE PAIN'
Adebolajo, wearing a white T-shirt and white trousers, gave a thumbs-up sign to his defense lawyer and blew kisses to a man in the public gallery, appearing to mouth the words "I love you". The man declined to comment outside court.

At the end of the hearing, Adebolajo stretched out his arms, pointed them to the sky and then kissed the book he was holding.

"I would like to alleviate the pain if I may," he told the court before being led from the dock.

The British-born son of Nigerian parents is charged with murder, the attempted murder of two police officers and possession of a firearm with intent.

A second suspect, Michael Adebowale, 22, was also remanded in custody to June 28 when he appeared by videolink at the Old Bailey for a bail hearing. He is also charged with murder and possession of a firearm with intent.

Rigby, 25, died at the scene of the attack, which took place in broad daylight near an army barracks on May 22. A post-mortem examination gave the cause of death as "multiple incised wounds".

In a statement to parliament on Rigby's death, Prime Minister David Cameron said lessons would be learnt from Woolwich and that more should be done to discourage radicalization over the Internet, in universities and prisons.

"It is as if, for some young people, there is a conveyor belt to radicalization that has poisoned their minds with sick and perverted ideas. We need to dismantle this process at every stage," he said after chairing the first meeting of a new panel of senior ministers aiming to tackle extremism.