You Are A Coward If You Can’t Probe Me, Oni Tells Fayemi 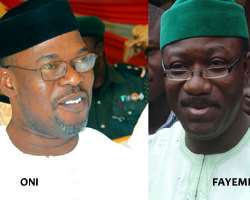 
Former Governor of Ekiti State, Chief Segun Oni has challenged the State Governor, Dr. Kayode Fayemi to use all known agencies to probe his government if he can.

The former governor, who spoke through his media aide, Mr. Lere Olayinka, in Ado-Ekiti today, maintained that he was not afraid of probe by anyone saying; “This time around, Fayemi must make real his threat and if he does not, we will go to court to get the court to compel him to do so. However, he must not be the one to appoint those who will carry out the probe because the finances of the government during his own tenure must also be probed.”

Governor Fayemi had said while addressing Action Congress of Nigeria (ACN) supporters in Ado-Ekiti yesterday that; 'With the conclusion of this case, they should be ready to account for how they stole our money, the contracts they used to siphon our money and all the micro-credit money they stole.”

However, reacting to the threat, Olayinka said; “It is obvious that Fayemi is either confused or intoxicated by high dose of nicotine and the governorship position purchased for him by his Lagos godfather so much that he no longer think of other thing than vendetta.

“If not, he would have remembered that there are court cases involving most of those who mentored the beneficiaries of the Micro-Credit Scheme and those cases, which were at the instances of the State Government’s probe of the scheme are still pending in the various courts.

“Also, this same Fayemi set up a panel to probe contracts awarded by Oni-led government and the panel came up with a white paper, which is being challenged in court.

“So, what does he want to probe again? Or has he lost faith in the State High Courts, where the cases are being tried?”

Speaking further, Olayinka said; 'the general public should also be reminded that this same Fayemi had accused Oni of overpayment on the contract for the dualisation of Ado-Ifaki road then when the contract sum, which was N6.3 billion was only increased by N1.1 billion, which is less than 20 per cent.

“The same Fayemi, who accused Oni of inflating the road contract has now increased it by 50 percent (from N7.4 billion to N11 billion). Just about five kilometres of the road is yet to be laid with asphalt.

“Therefore, Fayemi should stop threatening us with probe. We have told him several times to go ahead with the probe but he must also include the period that he has been governor of the State and the probe must be done by independent panel, comprising of EFCC, ICPC, TI, ICAN, ANAN, NBA and other relevant bodies.”

“Failure to do this will mean that he is not a true son of his father and we have no apology for saying it.”