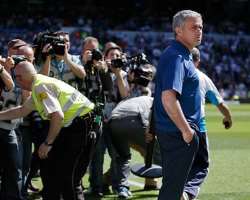 Jose Mourinho ended his three-year spell in charge of Real Madrid with a 4-2 win over Osasuna at the Bernabeu.

The Portuguese, 50, has been strongly linked with a return to Chelsea.

Mourinho received a mixed reception from the crowd and play was held up as stewards cleared a large group of photographers from the technical area.

A section of the home fans sang Mourinho's name regularly but there were plenty of negative banners in the crowd, including one bearing the message 'Good riddance Mou'.

Mourinho pointedly applauded Real's 'ultras' at the end of the game and headed down the tunnel within 30 seconds of the final whistle.

He released a statement before the match that said: "I wish all of Real Madrid's supporters much happiness in the future.

"I want to thank many fans for their support, and I respect the criticism of others. I repeat, happiness to all, and above all, good health. Hala [Forward] Madrid!"

After joining from Inter Milan in 2010, he guided Real to the Copa Del Rey in 2011 and La Liga title last season.

But Mourinho failed to deliver a 10th European Cup for the club and president Florentino Perez announced the Portuguese's departure last month.

The former Porto and Inter Milan coach's final year in Spain has been fractious with several reports of splits in the Real Madrid squad.

He has not selected goalkeeper Iker Casillas in the starting line-up since January amid rumours of a row between the pair.

Despite Mourinho's first-choice Diego Lopez being injured, Casillas was not even included on the bench for the Osasuna match.

Argentina forward Higuain finished from an Angel Di Maria pass and on-loan Chelsea man headed in from Mesut Ozil's corner as Real Madrid took a 2-0 lead into the break.

Torres pulled one back for Osasuna with a long-range strike and Cejudo equalised after Real failed to deal with a cross.

But, just when Mourinho's final afternoon at the Bernabeau was threatening to end in disappointment, Benzema swapped passes with Ozil before thumping home.