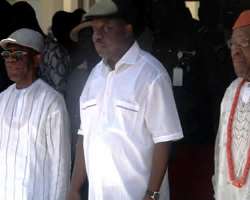 ASABA, May 29, (THEWILL) - Delta State Governor, Dr. Emmanuel Uduaghan has urged the people of the South-South Region to give maximum support to the President Goodluck Jonathan’s administration.


Governor Uduaghan who canvassed for the support Wednesday in Asaba during a State Luncheon to mark the 2013 Democracy Day celebrations, reminded the people of the region that they needed to ensure that Dr. Goodluck Jonathan succeeded as president of the country for the benefit of the region.


He stated that the Jonathan’s administration has creditably handled the biggest security challenges facing the nation and his transformation agenda was working. He called for prayers and maximum support from all Nigerians to enable him to succeed.


He admonished them not to do anything that will disrupt the peace and security currently enjoyed in the state.


He explained that the various strategies to ensure that the state was peaceful and secured has paid off handsomely as various foreign countries and embassies have acknowledged the relative peace in the state.


On the menace of kidnapping and armed robbery, Governor Uduaghan reiterated the government policy of demolishing any house used for kidnapping and keeping kidnap victims. He stated that anybody including native doctors who aid and abet kidnapping in the state would be treated an as accessory to the crime.


While commending the judiciary and the State House of Assembly for their support in handling the issue of kidnapping, Governor Uduaghan enjoined all Deltans especially community leaders and youths to cooperate with the government in its fight against kidnapping.


On the Delta Oil Producing Areas Development Commission (DESOPADEC), Dr. Uduaghan reminded the people that “the money for the commission is meant for development of the Oil Producing Communities and not for sharing” stating that “now that the commission has overcome its initial challenges, soon they will give an account of what they are doing”.


Uduaghan who informed the audience that the state Independent Power Plant in Oghara would come on stream in 2014, stated that the initial challenges facing the project has been overcome.


According to him “electricity is the fulcrum around which industrialization revolves. In this regard, government is procuring and installing electricity transformers to boost power supply in the state capital and other towns in the state...


“We are collaborating with the federal government on the National Integrated Power projects and the development of distribution injection transmission sub-stations in the state.”


While stating his administration’s laudable achievements in the health sector informed the gathering that the Delta State University Teaching Hospital, Oghara has become a medical tourist haven, Governor Uduaghan restated that the hospital has become a referral centre for neonatal cases. He reiterated his administration’s commitment to ensure that all health facilities in the state met world class standards.


In his address, Chief Peter Nwaoboshi, the State PDP chairman, commended Dr. Uduaghan for his developmental strides and assured him of the support of the party and all Deltans in the achievement of his “Delta Beyond Oil” vision.