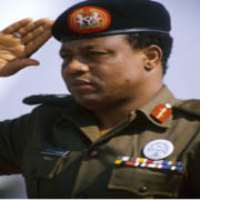 Huhuonline.com painstaking checks, it is now 19 years after a military administrator of Lagos state, ordered the forceful eviction of the residents of Maroko in Victoria Island.

The plight of the former residents has now attracted the attention of a U.K. based law firm. The law firm, Debevoise and Plimpton, has taken the fight for compensation and resettlement of the evictees to the African Commission on Human and Peoples' Rights.

The military government in the state had in July 1990, mobilized bulldozers and armed personnel to demolish Maroko, which was then a shanty town, with majority of the then residents unable to salvage their properties. Thereafter, the government turned the neighborhood into choice property and allocated plots to individuals and corporate organizations to build structures in what is now known as Victoria Island Extension.

The lead counsel of Debevoise and Plimpton and former Attorney-General of the United Kingdom, Lord Peter Goldsmith was at the Ilasan Housing Estate, Lekki, where some of the evictees were resettled on Wednesday, September 16. He said that the ACHPR would make a decision on the admissibility of the communication on the Maroko evictees at its 46th ordinary session taking place from November 11 to 25, 2009, in Banjul, The Gambia.

Goldsmith, who noted that he got to know about the case through a non-governmental organization, Social and Economic Rights Action Centre, said that the decision to approach the commission was as a result of the inability of the evictees to get justice from Nigerian courts.

Speaking to the evictees on Thursday (17th Sept.) Lord Goldsmith said: “If you are to imagine a stronger case to justice and a more imperative need to justice than the people of Maroko – 19 years is too long.”

Reacting to this hint, leader of the Maroko evictees, Pa Samuel Aiyeyemi said: “We want full compensation of all our economical loses and a lot of things we cannot even quantify in terms of cash.”

In the communication, which was sent to ACHPR in May 2009, SERAC wanted the commission to hold the Nigerian government accountable for the plight of the evictees due to its prolonging inaction. The organization also wanted the commission to direct the government to compensate all the evictees for the loss of lives, homes, businesses, schools, religious institutions and other properties.

It wanted the evictees compensated for breaches of their human rights, to be provided with adequate housing and not to be threatened with removals from the temporary shelter they are now occupying.

“What we say at heart is that wrongs were done to the people of Maroko. The evictions were not justified; they were carried out in a brutal way with people losing all their belongings and with physical violence and worse.

“The demands are simple the case is being accepted by the commission. We now have a second stage where some legal requirements are to be discussed and I hope that will take place in November and then I hope we move for a hearing which will actually look at the merits, look at the evidence, look at what actually happened and give judgement,” Lord Goldsmith said.

Lord Peter Goldsmith QC, PC joined Debevoise and Plimpton as European Chair of Litigation in September 2007. He is based in the London office. Lord Goldsmith served as the UK's Attorney General from 2001-2007, prior to which he was in private practice as one of the leading barristers in London.

Without mincing words, in July 1990 the then government of Lagos State under the leadership of Colonel Raji Rasaki (now deceased), ordered the demolition of Maroko community, leaving over 300,000 Lagosians homeless. The demolition of the entire community was carried out after a-seven-day quit notice announced over the radio and led to the forced eviction of an estimated 300,000 people from their homes of several decades. The eviction was implemented by armed security agents who physically assaulted residents bold enough to attempt to salvage their property from the rampaging bulldozers.

Facts available to huhuonline.com reveal that twenty women were reported raped by the security agents. The Lagos State government made no prior arrangement to resettle or compensate the evictees before commencing the evictions. Faced with homelessness, the evictees took up residence at Ilasan, Ikota and Epe communities (located between 5 and 10 kilometers away from former Maroko community) which comprised abandoned uncompleted buildings built by the Lagos state government; the buildings were in various stages of dilapidation.

Subsequently, the state government officially allocated the buildings to about 2% of the affected landlords (an estimated ten thousand landlords were forcefully evicted) whilst the remaining 98% of the evictees were neither resettled nor compensated. It would be a veritable step for government of Lagos state government to resettle and compensate the evictees, as well as analyze and recommend various budgetary policy options to resettle the Maroko evictees despite the fact that those ill steps would cause heavy liability on the current administration that has no hands in the ill treatments committed by the autocratic government of yesteryears.